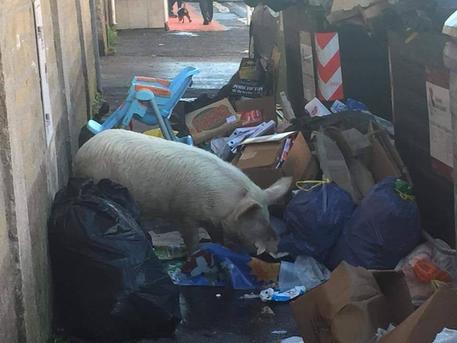 (ANSA) - Rome, January 17 - A pig in Rome trash whose picture was posted by a rightwing party as an alleged indictment of Rome Mayor Virginia Raggi's inaction over the crisis was in fact owned by a notorious Rome crime family, the first citizen said Wednesday.
"I'm sorry for (Brothers of Italy leader) Giorgia Meloni but we have traced that pig to the Casamonica family who said that it strayed," Raggi said.
Brothers of Italy responded by saying Raggi and her anti-establishment 5-Star Movement should be "ashamed" of the trash emergency and "try to clean up the capital".
"What do they mean, that a pig should be allowed to root around in rubbish just because it is owned by the Casamonicas?", the FdI said.
Meanwhile comic Gene Gnocchi enraged rightists by saying that the pig was named Claretta Petacci, Benito Mussolini's mistress.
"Claretta, who committed no sin aside from being murdered for love alongside Mussolini, has now been shamefully compared to a pig," said rightwing daily Il Giornale.