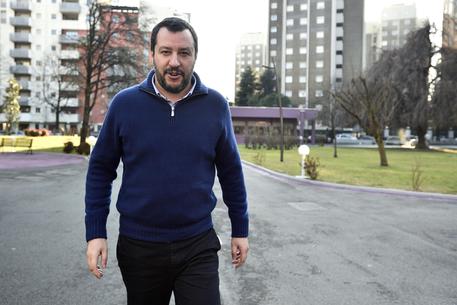 (ANSA) - Rome, January 16 - European Economic Affairs Commissioner Pierre Moscovici made an "unacceptable intrusion" into the March 4 Italian election campaign when he called centre-right Lombardy governor candidate Attilio Fontana's claim of a risk to the white race from migrants "scandalous", the leader of Fontana's anti-migrant League party, Matteo Salvini, said Tuesday. Salvini said: "unacceptable intrusion of a European bureaucrat into the Italian elections. The policy of uncontrolled immigration and economic sacrifices imposed by Europe have been a disaster and they will be rejected by the free vote of citizens, Brussels bureaucrats can be sure of that". Salvini is the the League's premier candidate for March 4.
There will be general election to the national parliament as well as regional votes in Lombardy, the region around Milan, and Lazio, the region around Rome.
Earlier Tuesday, Salvini ruled out the hypothesis that Fontana could pull out after his comments on the need to protect the "white race" from an alleged migrant invasion. "Forget about it," Salvini said when asked about a possible withdrawal from the race.
Fontana, a League member and the former mayor of Varese, subsequently said the comment was a slip of the tongue.
But that did not stop a huge furore, with Rome's Jewish community among those expressing concern about the comments. On Tuesday Fontana said the Italian Constitution "is the first to cite race", in an article saying citizens of all races and creeds are equal, and so that should be changed.
He repeated that immigration policy must be changed.