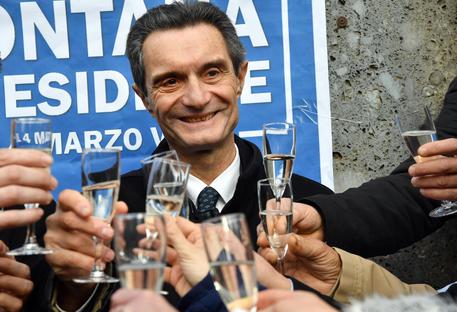 (ANSA) - Milan, January 15 - Attilio Fontana, the centre-right candidate to be the next Lombardy governor, has said that Italy must not accept large-scale migrant arrivals, suggesting the "white race" is in danger. "Here is not an issue of being xenophobic or racist, but a question of being logical or rational," Fontana told the Northern League's Radio Padania on Sunday. "We cannot (accept all asylum seekers) because we don't all fit, so we have to make choices. "We must decide if our ethnicity, if our white race, if our society, should continue to exist or if it should be wiped out.
"A serious State should plan and programme a situation of this type.
"It should say how many we consider it right to receive and how many migrants we don't want to allow in, how we want to assist them, what jobs to give them, what homes and schools to give them," added the former mayor of Varese, a League member.
"At that point, when a government prepares a project of this type, it can out it before its citizens.
"It is absolutely unacceptable to say that we have to accept them all.
"It is a design that we must respond to, that it is necessary to rebel against. "We cannot accept them all because, if we did, we would no longer be ourselves as a social reality, as an ethnic reality. "Because there are many more of them than us and they are much more determined to occupy this territory".
On Monday Fontana said he is use of the term "white race" was a "slip of the tongue".

Centre-left Lombardy governor candidate Giorgio Gori responded to his centre-right rival Attilio Fontana's warning that migrants pose a threat to "the white race" by saying the campaign for the March 4 elections could do without "hysteria and demagoguery".

"Election campaign: there are those who talk of pitchforks and white race. We talk about training, jobs, growth, and Europe", Bergamo Mayor Gori said on Facebook. Gori launched an appeal to Lombardy voters, saying "you choose: we must #DoBetter, without hysteria and demagoguery". Lombardy and Lazio are going to the polls to elect new regional governments on March 4, the same day as the general election.