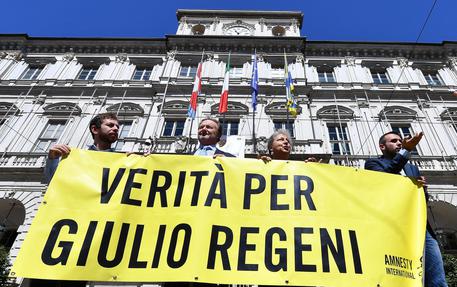 (ANSA) - Rome, November 2 - Rome prosecutors sent a formal petition to the British authorities last month to be able to question Giulio Regeni's Cambridge University tutor, Professor Maha Abdelrahman, La Repubblica reported on Thursday.
The Rome-based daily reported that the prosecutors also want to acquire the professor's mobile and fixed-line phone records from between January 2015 and February 28 2016 to reconstruct her network of relations.
The move regards alleged ambiguity and omissions by the woman in relation to the probe into the torture and murder of the 28-year-old Italian post-graduate student in Egypt early last year, La Repubblica wrote in an article entitled 'The Lies of Cambridge'.
It also reportedly relates to unease expressed by Regeni in two Skype conversations with his mother Paola. Rome prosecutors reportedly want clarification on several aspects of the case, the newspaper said.
These regard how the subject of Regeni's research on street trader unions was chosen, the selection of his tutor in Egypt, the research method used, who decided what questions to ask the traders and whether Regeni gave the results of his research to Professor Abdelrahman during a meeting in Cairo on January 7, 2016. Rome prosecutors have also asked the British judicial authorities to identify all of the Cambridge University students working under Abdelrahman who were sent to Cairo between 2012 and 2015, sources said on Thursday. The petition requests that those students be questioned in the presence of Italian investigators. The investigators want to know whether there were other cases like Regeni's in which students were asked to research the independent unions in Egypt. Regeni was asked to look into this by his tutor even though his PhD regarded the general subject of the North African nation's economic development.
The British authorities have until January 23 to respond to this new petition, formally called a European Investigation Order, after being notified on October 23. It is the third petition sent to the British authorities over the Regeni case. In relation to the first one in June 2016, Abdelrahman refused to be questioned by the judicial authorities and sent an email saying she only met Regeni briefly on the morning of January 7, 2016, in a Cairo bar. The second one regarded consultancy firm Oxford Analytica, which said it had not had relations with Regeni after September 2014. "For Giulio Regeni we demand only the truth," Democratic Party (PD) leader and ex-premier Matteo Renzi said on the @matteorenzi Twitter account. "Are the Prof of Cambridge hiding something? #verità".

A Cambridge University spokesperson told ANSA Thursday that Dr Abdelrahman, "has repeatedly expressed her
willingness to fully cooperate with the Italian prosecutors".
The spokesperson added that the university does not intend "to respond to sensationalist insinuations that are of no help".
He said the university had yet to receive a formal request for her to testify.
In the meantime, the spokesperson said, it would be "wholly inappropriate for Dr Abdelrahman to speak to the media before
giving evidence to the Italian authorities".