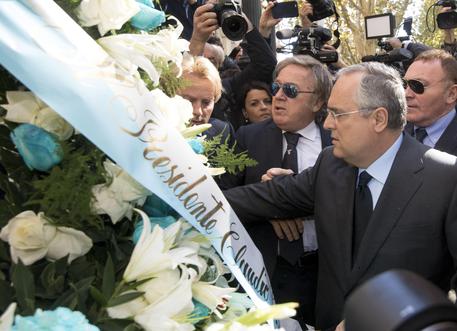 (ANSA) - Rome, October 24 - Lazio Chairman Claudio Lotito on Tuesday pledged to take fans to Auschwitz as he laid flowers at Rome's synagogue after a group of the club's ultra fans used the image of Anne Frank to insult followers of city rivals AS Roma.
"With this gesture today we intend to reiterate our clear, unswerving position," Lotito said. "Lazio has always repressed certain phenomena with initiatives in schools. "As of today we intend to organize a day each year when we will take 200 young people to Auschwitz".
Stickers with images of Anne Frank manipulated to show her wearing a Roma shirt were attached on the Curva Sud of the Stadio Olimpico during Lazio's 3-0 win over Cagliari on Sunday.
The ultras of the Roman club were in the stand of their rivals because their own Curva Nord was shut because of previous incidents of racism.
President Sergio Mattarella on Tuesday led condemnation. "The face and pages of the diary of Anne Frank, her story of suffering and her death at the hands of Nazi barbarism, moved the world," Mattarella said. "Using her image as a sign of insult and threat, in addition to being inhuman, is alarming for our country, which was infected 80 years ago by the obtuse cruelty of anti-Semitism".
Efraim Zuroff, the director of Jerusalem's Simon Wiesenthal Centre, on Tuesday blasted the slur as "disturbing, miserable, repugnant". "There are no words to condemn such a shameful gesture," Zuroff said. "It is trivialization of the Shoah, transforming an inhuman tragedy into a simple squabble between fans". Zuroff said he understood the "symbolic impact" of Democratic Party (PD) leader Matteo Renzi's proposal for Serie A players to wear the Star of David on their shirts this week. But he added that "it does not add awareness - it would be better to have the players visit Auschwitz". European Parliament President Antonio Tajani also expressed condemnation. "I cannot fail to firmly condemn what happening in Rome, where a group of hooligans used the image of Anne Frank to offend the fans of another club," Tajani said during a plenary session in Strasbourg. "It was a serious deed. Everyone has the right to practise their religion and the Jewish community is part of out union. "I think anti-Semitism should remain exclusively a horrible experience from our past". Italian Soccer Federation (FIGC) prosecutors are set to open a probe into the incident.
Lotito led a delegation including players Wallace and Felipe Anderson to lay the flowers at Rome's synagogue. There were no official representatives of Rome's Jewish community present. "It was not arranged," sources from the community said. "In addition to gestures, concrete initiatives by all the clubs are needed".