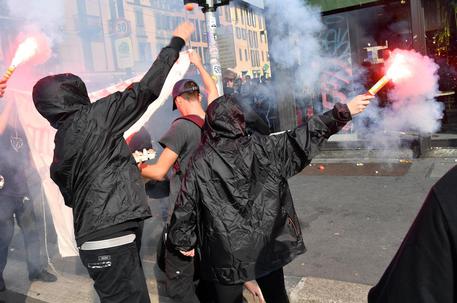 (ANSA) - Rome, October 13 - Students protest across Italy Friday against job-placement schemes and against entry exams, as well as demanding more resources for underfunded state schools to boost lessons and keep rundown buildings in a better state of repair.
"We're students, not workers," read banners also proclaiming "no to free exploitation".
There was tension in Milan after hooded protesters threw eggs and tomatoes against the windows of a McDonald's at Porta Ticinese.
The offices of power company Edison and the ruling centre-left Democratic Party were also daubed with slogans.
In Sicily, students also clashed with police outside a McDonald's in Palermo, in Piazza Castelnuovo.
Two students were arrested in the Sicilian capital but immediately released.
Education Minister Valeria Fedeli said she would hold talks with all the sides involved on December 16, saying "we are working to raise the quality of placement schemes." A group of students interviews by ANSA said: "Today we're being exploited and tomorrow we'll be in totally precarious employment".
They said "serving hamburgers, cleaning toilets and selling shoes is not use to anyone".
The protests come after a string of demos against contested school reforms called 'the Good School' passed by the previous government of Democratic Party leader Matteo Renzi.