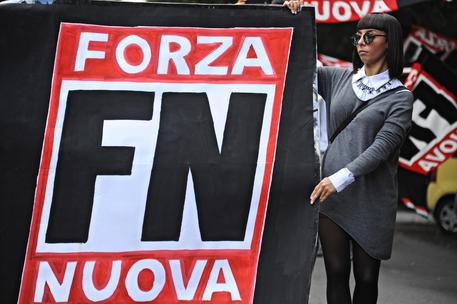 (ANSA) - Rome, October 12 - Interior Minister Marco Minniti said Thursday the far-right extraparliamentary New Force (FN) group will not be allowed to stage a 'march on Rome' or any other demonstration on October 28, the anniversary of the March on Rome that swept Benito Mussolini into power in 1922. He said he had "already told Rome's police chief not to grant authorisation for the event promoted by Forza Nuova in Rome on October 28".
FN leader Roberto Fiore said that the far-right group would go ahead with the march despite Minniti's statement. "We'll be in the square anyhow on October 28. All the Italians who really love their homeland will demonstrate," said Fiore, accusing Minniti of not following the rules which dictate that the Rome police chief must respond to FN's application to hold its march.
FN earlier on Thursday insisted it will go ahead with a "march of patriots" in Rome October 28 despite it having no official permission. On social networks, FN told marchers to gather for a 16:00 start in the Fascist-era EUR district's Piazzale Pier Luigi Nervi.
FN leader Fiore said on Facebook he had handed in an application to stage the march "not in central Rome but along a very Roman circuit".
He said "the theme of the march might be described as Constitutional: to meet the concerns of many who see the freedoms of Italians being restricted ever more, I'm referring to the right to criticise the invasion (of migrants) and the continuous anti-Italian discriminations". Fiore said there had been "many requests" to join the march "from all over Italy".
The head of the Rome chapter of the National Partisans' Association ANPI, Fabrizio De Sanctis, said "the anti-Fascist State must intervene to block the March on Rome". He said "it's no longer just a joke but a subversive plan that must be defeated". De Sanctis said: "this State should be fully anti-Fascist, held up by an anti-Fascist Constitution. We as ANPI have met various associations and parties to organise a series of initiatives but the State must intervene."