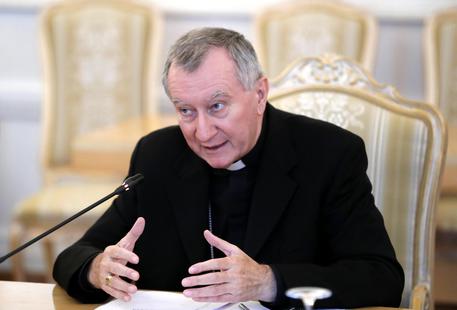 (ANSA) - Rome, September 28 - Vatican Secretary of State Pietro Parolin said on Thursday that "it's important to dialogue even within the Church", in response to a letter from a group of conservative Catholics accusing Pope Francis of heresy. "People who disagree express their dissent, but on these things we have to reason, to try to understand one another," he said, speaking on the sidelines of a conference on Iraqi Christians held by ACS, a Vatican-based international non-profit that aids persecuted Christians worldwide. The letter accused Pope Francis of heresy in his 2016 document Amoris Laetitia - The Joy of Love The conservatives Catholics delivered to the pope in August issuing him a "filial correction" - a measure they said was being using for the first time since the 14th century - over the document, which opens up the possibility of divorced and civilly remarried Catholics receiving communion.
Among the signatories is Ettore Gotti Tedeschi, the former president of the Vatican bank, the Institute for Religious Works (IOR).
The letter accuses the pope of seven "heretical positions about marriage, the moral life, and the reception of the sacraments, and has caused these heretical opinions to spread in the Catholic Church".
The signatories said their initiative does not conflict with the Catholic dogma of papal infallibility "since the Church teaches that a pope must meet strict criteria before his utterances can be considered infallible.
"Pope Francis has not met these criteria," it added.
The conservatives also accused the pope of having Modernist leanings and of being influenced by the ideas of Martin Luther.