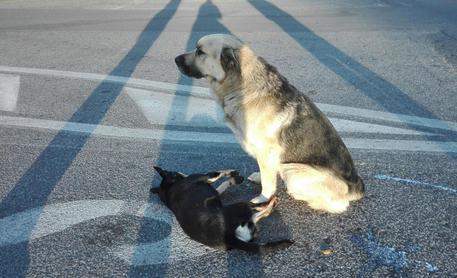 (ANSA) - Rome, September 21 - The story of dog who sat beside a fellow canine for hours on Wednesday, keeping vigil after it was run down and killed on a Rome road, has moved animal lovers all over Italy.
"I was taking my daughter to school and got trapped in a jam.
At first I thought there was an accident but then I noticed the dog," said Marco Milani of the Equi Diritti association.
"He was there in the middle of the road, still and looking after his friend, who had probably been killed in a hit-and-run". Eye-witnesses reported that the dog started the vigil on Rome's busy Via Tuscolana at 5am. "Here everyone recalls the two dogs often playing together in the street," continued Milani.
"I published the photos on social media because I didn't want him taken to a dog pound, but fortunately he has an owner.
"Dozens had offered to adopt him".