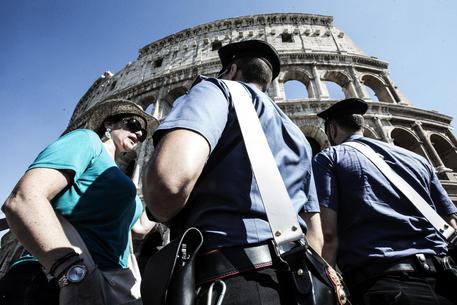 (ANSA) - Rome, August 18 - Security in Rome will be heightened after the Barcelona terror attack and there will be checks on car rentals and any vans heading for the city centre, sources said Friday. Security around Spanish targets and traditional "sensitive" areas will be stepped up, they said.
Italy will boost security measures at sensitive targets and areas where people tend to gather after the Barcelona and Cambrils terror attacks that killed a total of 14 people, Interior Minister Marco Minniti said. The interior ministry said attention was "extremely high" but the "threat level" had not changed. Minniti was speaking after a meeting of the Strategic Anti-Terrorism Analysis Committee.
Premier Paolo Gentiloni telephoned Spanish Premier Mariano Rajoy to voice Italy's condolences, friendship and solidarity over the attacks, government sources said. Gentiloni stressed unity and firmness towards terror, which will never beat freedom and democracy. Rajoy assured the utmost collaboration with Italy and the other countries hit by the attacks. Italian President Sergio Mattarella wrote to Spanish King Felipe VI, voicing "horror and repulsion".
Spain and Italy were united in a "common pain" over the attack, Mattarella said.
He voiced "great concern" over the "dramatic" attack, which was "further, execrable proof of the cowardice of the terrorists". Mattarella said Italy was determined to work with Spain, its EU partners and the whole international community, in a "fight, without quarter being given, against terrorism and all forms of violent extremism, in defence of the common values and democratic freedoms, as well as the security of our countries".
Mattarella also sent a message to the families of the Barcelona terror victims saying "in Barcelona, in the heart of Europe, wicked men struck innocent people and families, united only by the desire and the right to live serenely. The terrorists tore a community of many nationalities, defenceless, made up of innocents, women, men, children. They attacked life and co-existence. Terrorism of an Islamist matrix and terrorists will not go unpunished".
Premier Paolo Gentiloni tweeted "#Barcelona Italy remembers Bruno Gulotta and Luca Russo and rallies round their families.
Freedom will beat the barbarity of terrorism".
Foreign Minister Angelino Alfano tweeted "we are close to the families of the victims and the injured in Barcelona. We will react united in defence of Europe".
Pope Francis condemned the attack as an "inhuman act" and "blind violence, a grave offence to the Creator", in a telegramme of condolences sent to Barcelona Archbishop Juan José Omella y Omella. Francis said he was praying that the international community would work "with determination for peace and harmony in the world".
The Colosseum's lights will be switched off from 22:00 to 22:30 tonight in a sign of solidarity with the city of Barcelona and mourning for the 14 victims of the terror attacks, Culture Minister Dario Franceschini said.