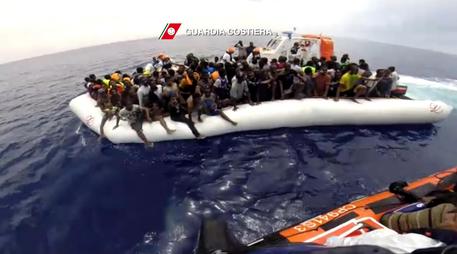 (ANSA) - Rome, August 14 - After MSF suspended its rescue activities for migrant boats experiencing difficulty in the Mediterranean Sea off Libya, on Monday Sea Eye and Save the Children did as well due to deteriorating security conditions. The Libyan coastguard has repeatedly clashed with NGO vessels on the edge of Libyan waters, at times opening fire, and the NGOs say they cannot continue to ensure the effectiveness of the operations. In less than 24 hours, thus, three of the eight NGOs that over the past 20 months had not left international waters off Libya and had saved thousands of migrants have ceased to operate in the area, at least temporarily.
The NGOs rescued 46,796 people in 2016, about 38% of the total that landed, and 12,646 in the first four months of 2017, equal to 35% of the total. Considering the fact that the Juventa shop of the Jugend Rettet NGO has been seized in Trapani and that the boats of Proactiva Open Arms, Seawatch and MOAS are at the moment in the Valletta port, the only NGO ship currently involved in migrant search and rescue operations off Libya is SOS Mediterranee's Aquarius.
The suspension of activities is due both to threats from the Libyan coastguard and Tripoli's announcement that it will create a broader search and rescue (SAR) operation in its territorial waters, entrance to which will be possible only after authorization from Libyan authorities. The NGOs have said that both Italy and the EU are also responsible, however, for this situation that will lead to more deaths in the Mediterranean.
Proactiva founder Oscar Campos said that "that is what the EU wants". The Aquarius is off the Tripoli coast and will spend the day near the near the C-Star, a boat of the anti-migrant Defend Europe. "In addition to saving lives, our priority will be to ensure the maximum security of our crew," the NGO has said. "So long as continues to be ensured, we will remain in the area, rescuing boats in danger and prevented the forced return to Libya of those rescued." In any case, "limiting access and the activities of the NGOs will, once again, lead to an increase in deaths and suffering in the Mediterranean".