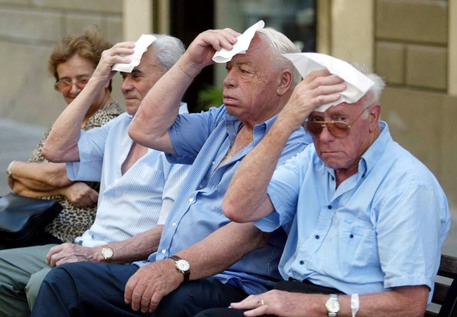 (ANSA) - Rome, August 4 - Italy's record-breaking heat wave continued on Friday with perceived heat - the apparent temperature - reaching 55 degrees at Grazzanise, near the Campania city of Caserta, according to the Italian Air Force's website. The actual temperature was 35 degrees but the high humidity levels made it feel much hotter. Sardinia and Puglia are sizzling too. The apparent temperature at Marina di Ginosa, near Taranto, hit 50 degrees. In Sardinia, it climbed to 49 at Capo San Lorenzo, 48 at Decimomannu and 45 at Capofrasca. A 70-year-old man died in a park by the River Vezzola in the central city of Teramo on Friday of a suspected heart attack linked to the heat.
Two passers-by, including a nurse, tried in vain to resuscitate the man. At the moment 26 major Italian cities are on the health ministry's maximum heat alert, red level three, and they are set to stay there until Sunday. The record temperatures, with maximums in many areas above 40 degrees centigrade, are expected to continue until next week.
The heat wave and a long rainless period have led to a drought that had hit most of the country and cost the agriculture sector billions. Agriculture Minister Maurizio Martina has said that state of calamity is set to be declared in 11 Italian regions due to the ongoing drought - Emilia-Romagna, Veneto, Tuscany, Marche, Lazio, Molise, Puglia, Calabria, Sicilia, Sardegna and the autonomous province of Trento. The heat has also contributed to wildfires in many areas, one of which claimed the life of an elderly woman near the central city of Teramo on Thursday. The Vatican has turned off its fountains because of the drought.