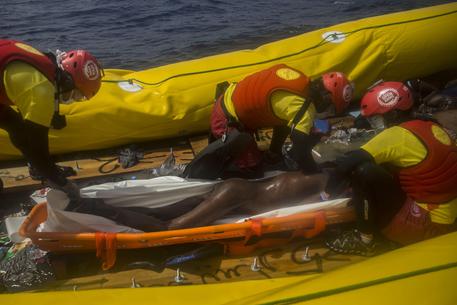 (ANSAmed) - ROME, JULY 31 - NGOs performing migrant search and rescue operations in the Mediterranean are due to sign a controversial new code of conduct at the interior ministry on Monday afternoon amid ongoing disagreement over some of the key points. The Interior ministry had already announced possible 'measures' against organisations that refuse to sign.
The main sticking points include the requirement for NGOs to carry representatives of the judiciary police and to avoid transferring rescued migrants to other vessels. Following a second tense meeting on Friday, it was agreed that the judiciary police should be present "if possible, and only as long as is strictly necessary".
However, the request that they be unarmed was rejected. Under the new rules migrant transfers will now be banned "except on the request of the competent maritime rescue coordination centre and under its coordination, based also on information provided by the ship's captain".
Spanish NGO Proactiva Open Arms has already announced that it does not intend to sign the code.
German Sea Watch has said it will soon put a second rescue boat in operation, and claims the code is "largely illegal". "Rather than saving human lives it will have the opposite effect," the organisation said.
"In light of the more than 2,000 deaths at sea this year, what is needed is not more rules, but greater rescue capacity," it added. However, Interior Minister Marco Minniti wants the code to take immediate effect, claiming it is "essential for the security of the country". "Over 40% of rescued migrants arrive in Italy on ships operated by NGOs," he said. The aim now is to shift responsibility for search and rescue operations onto the Libyan coast guard authority with Italian support. In this respect, Libyan Premier Fayez al Serraj has confirmed asking Italy for logistical support and training programmes for coast guard and border officials, as well as modern equipment and weapons. (ANSAmed).