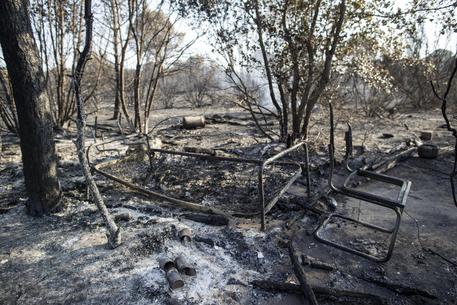 (ANSA) - Rome, July 25 - Italy's weeks-long wildfires emergency continued on Tuesday.
A new blaze broke out at Rome's Castel Fusano pine wood, which was also hit by a devastating blaze last week suspected to have been caused by arsonists. Three fire brigade squads and a Canadair aircraft were in action to fight the flames. A blaze that started on Monday in the Gargano area of Puglia, burning many hectares of forest and Mediterranean vegetation, continued overnight and two Canadair aircraft were being drafted in to battle it. A vast fire near to Santa Teresa Gallura, in Sardinia, caused over 100 people to flee from their homes.
A farmer in the province of Nuoro, also in Sardinia, suffered burns as he tried to save his flock from the flames. A fire that broke out late on Monday at a trash deposit near Milan is under control, but the stench it generated can still be smelt in parts of the city.