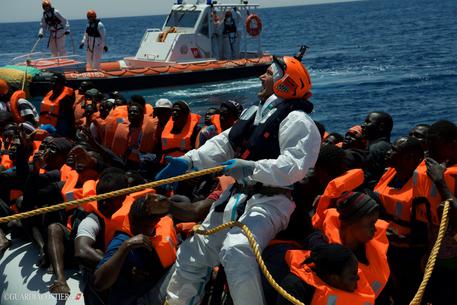 (ANSA) - Turin, July 21 - Premier Paolo Gentiloni said Friday that Italy would not take lessons from its EU partners after the Visegard group leaders sent him a letter calling on Rome to "close the ports" to asylum sekers. "We have the right to demand solidarity from our neighbours, countries with whom we share the European project," Gentiloni said in Turin. "We don't accept lessons, nor threatening words. "We limit ourselves to serenely saying that we do our duty and we demand that Europe does it without giving dubious lessons".
Hungarian Premier Viktor Orban announced Friday that the the four leaders of the Visegrad group, which also includes the Czech Republic, Slovakia and Poland, had written a letter to Gentiloni calling in it to close its ports to asylum seekers.
In the letter the four said refugees had to be differentiated from economic migrants before they arrived in Europe. According to Orban, who is not ruling out the military option, the problem must be resolved in Libya. The International Organization for Migration (IOM) said Friday that 93,369 asylum seekers arrived in Italy via sea up to July 19 this year, 85% of the total of 111,514 for the whole of Europe. It said 2,360 people have died trying to cross the Mediterranean so far this year.