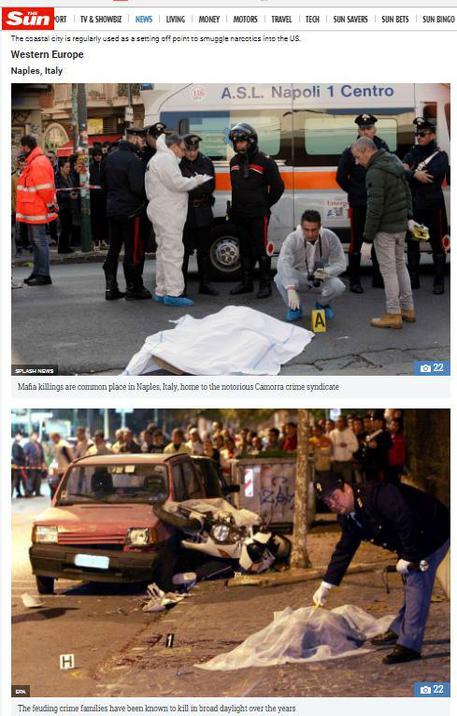 (ANSA) - Rome, July 18 - Naples is among the top 10 most dangerous cities in the world, the Sun said Tuesday.
The mafia-hit Campania capital was rated the most dangerous city in western Europe.
The ranking included ISIS's Syrian capital Raqqa, Mogadishu in Somalia, Perth in Australia and St Louis in the United States.
The poll rated terror, drugs, murders, the presence of mafia gangs, war, racial disorder and the violation of human rights.
Naples is the home of the Camorra mafia.
Naples Mayor Luigi de Magistris told ANSA: "It is a false, superficial judgement, from someone who evidently never spent a day of his life in Naples, a city full of problems but which is not in the place in the world rankings where the Sun puts it".
Local theatre and film actor Fortunato Cerlino, who played ruthless boss Pietro Savastano in the global TV Camorra crime hit Gomorra, said "I'm not interested in commenting on a tabloid. We know what kind of news they carry, only sensationalism.
"I don't mean Naples is Switzerland, or that you don't risk having your watch stolen in the street...but it's not an international survey drafted by an authoritative research agency, which would have made for interesting reading".
The dean of Naples Federico II University, Gaetano Manfredi, said "we are the victims of the stupidity of many of the rankings which show how strong the prejudice against Naples is".
Adoptive Neapolitan Sylvain Bellenger, the French head of the Capodimonte Museum for the last two years, said: "I've been here many times in my life, and at different times. Naples is not a dangerous city, if anything it's chaotic, but it's a sweet chaos".