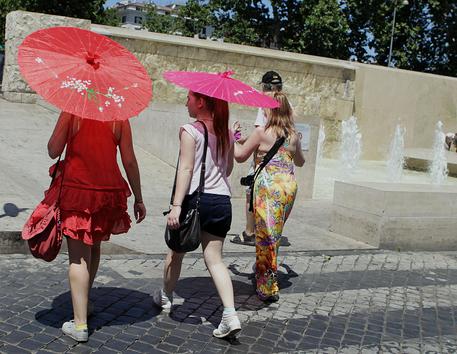 (ANSA) - Rome, June 23 - Italy's health ministry put its heat risk level for the weekend to its highest, level 3-red, for 10 cities across the peninsula on Friday. The alarm will kick in on Saturday for Bologna, Bolzano, Brescia, Perugia, Torino, and on Sunday for Ancona, Campobasso, Florence, Perugia and Pescara. Italy is gripped by drought due to the heat and lack of rain. Premier Paolo Gentiloni's cabinet on Thursday declared a state of emergency for the northern provinces of Parma and Piacenza due to the shortage of water.
Tuscany Governor Enrico Rossi has asked the government to call a state of emergency for this region too. Rome Mayor Virginia Raggi has told inhabitants to limit water use for gardens, filling swimming pools and washing cars and the city is studying a plan to ration water. The mighty River Po is little more that a 13 centimetre stream at 30 kilometres from the source.
The water shortage has been running since autumn 2016 and has caused damaged to agriculture amounting to almost one billion euros so far.