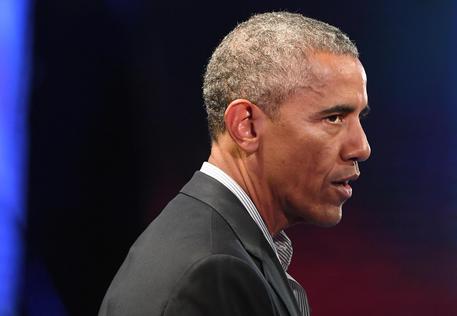 (ANSA) - Milan, May 9 - Former United States president Barack Obama stressed the importance of the Paris agreement on combatting climate change during a speech in Milan on Tuesday.
"With (Italian ex-premier) Matteo (Renzi) we helped give the world a very significant agreement on the climate," said Obama, who is on the second day of a two-day visit to Italy's business capital. Incoming French President Emmanuel Macron asked Obama's successor President Donald Trump not to abandon the Paris agreement during the phone call the tycoon made to congratulate the former on his election, CNN reported a Macron spokesperson as saying.
A crunch White House meeting on whether the Trump administration should dump the deal was set to take place on Tuesday, but has been postponed.
Obama, in Milan to address the Seeds and Chips fair, said he was confident that "the United States will continue to move in the right direction" on the Paris agreement.
He added that the fact the Trump administration had differences of opinion with him was "part of democracy". Obama said his work after leaving the White House is to "train the next generation of leaders" in the world. He said he had talked to Renzi on "setting up an efficient network of global activists".
He also spoke about terrorism in Milan, arguing a shortage of jobs was a factor. "Technology is creating high capital intensity in many economic sectors and less demand for labour and this will become a problem in the advanced world," he said. "This is one of the things that worries me most. I am certain that this is part of the problem that instigates radicalization and terrorism in many countries of the Middle East and south Asia. "If many young people are unemployed they will channel their energies in an unhealthy way".