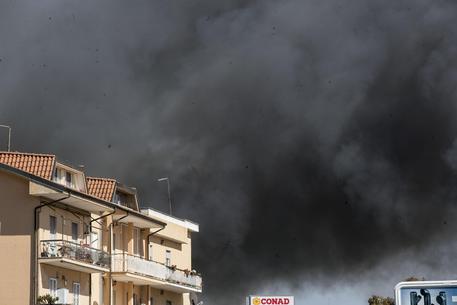 (ANSA) - Rome, May 5 - Fabio Fucci, the mayor of the town of Pomezia, south of Rome, on Friday ordered that homes and other buildings within a 100-metre radius of a huge blaze at a trash-storage site be evacuated. He also ordered the closure of two nursery-elementary schools that fell within a two-kilometre radius of the fire.
Rome Mayor Virginia Raggi advised the inhabitants of 21 towns south of the capital to keep their windows closed to prevent them breathing fumes from waste plastic, paper and other recycled materials. The towns are Nettuno, Anzio, Pomezia, Ardea, Velletri, Lavinio, Lanuvio, Genzano, Albano laziale, Ariccia, Nemi, Castel Gandolfo, Marino, Ciampino, Frascati, Grottaferrata, Rocca di Papa, Rocca Priora, Montecompatri, Monte Porzio Catone and Colonna. As well as being mayor of the capital itself, Raggi is also mayor of the greater Rome metropolitan area. Firefighters have been combatting the blaze at refuse-storage firm Eco X since around 8:30. The fire sent out a massive plume of black smoke over nearby roads and the Pontina highway, causing traffic disruption for a spell, and generating a strong stench.
Raggi said that the toxic cloud did not pose a problem for people in Rome.
"From what we know from the notification from the ASL 6 (health authority), the fumes have not spread to the city of Rome, so at the moment we do not have critical situations in the city," she said.
Prosecutors in Velletri opened a probe into possible arson in relation to the blaze. The prosecutors also tasked environmental agency ARPA with the job of monitoring air-quality, the soil, subsoil and groundwaters in the area affected. The outcome of the first tests are expected in a few days and it is likely to take that long to complete put out the fire too.
"I call on citizens to stay calm and respect the orders," Fucci said on the local council's Facebook page. "The operations to put out the fire and survey the air quality are proceeding.
"ARPA is on the scene and installing equipment to test the air quality.
"We will give extensive updates on all developments". One local woman said the fire followed "a huge explosion, then lots of others in quick succession". "I was having breakfast when I hear the bang," said Sabino D'Agnelli, who lives a few hundred metres from the plant. "A few minutes later my daughter called me to say that the plant was on fire".