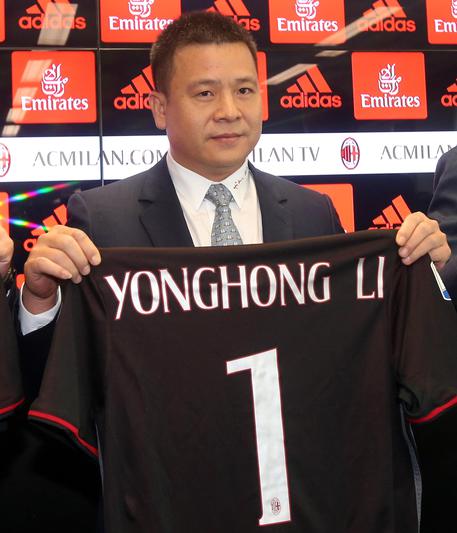 (ANSA) - Milan, April 14 - New AC Milan owner and president Li Yonghong ended his first speech in charge Friday saying, in Italian, "Forza Milan". He said "this glorious club is starting a new chapter. The success of this transition was made possible by the deep love of the Milan fans, by the efforts of the partners, and I thank (ex-premier Silvio) Berlusconi and Fininvest for the trust they have placed in us". "We have a great responsibility on our shoulders," Li went on, adding that Berlusconi's daughter Barabra would be head of the Milan Foundation.
The new club CEO, Marco Fassone, told reporters that Silvio Berlusconi "knows the club is in good hands".
Berlusconi's 31-year era as AC Milan owner came to an end Thursday when Chinese businessman Li formally became the owner. In his first statement, Li said "I thank Berlusconi and Fininvest for their confidence, and the fans for their patience, from today we will build the future".
Berlusconi said that "if today I leave all operational and representative posts, I will always remain Milan's no.1 fan, the team that my father taught me to love as a boy, the dream we realised together. "I send the new owners the most cordial and deeply felt wish that they will reach even more extraordinary targets than the ones we did". Berlusconi said he was leaving "with pain" but in the awareness that "a single family is no longer able to make the investments needed to compete at the top European and world levels". He said he would "never forget the emotions Milan gave me and all of us".
Berlusconi's holding company Fininvest closed a deal selling 99.93% of the seven-time European champion's shares to Luxembourg-based vehicle Rossoneri Sport Investment Lux, created ad hoc by the Chinese investor. "Fininvest today finalised the sale to Rossoneri Sport Investment Lux of its entire stake, 99.93%, held in AC Milan", a joint statement said.
"The buyers have confirmed their commitment to make major interventions of recapitalisation and financial and assets reinforcement of AC Milan".
Italy coach Gian Piero Ventura said he was sad to see Berlusconi go and called the Milan side of Ruud Gullit and Marco Van Basten "one of the three clubs that made the history of soccer" in the last 50 years along with Johan Cruyff's Ajax and Barcelona.