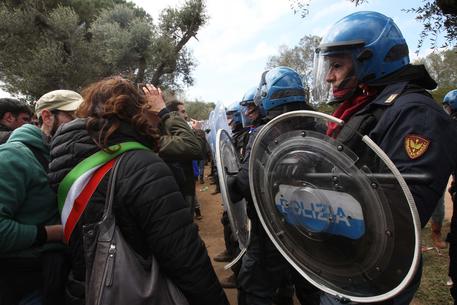 (ANSA) - Melendugno, March 28 - Police on Tuesday clashed with protestors aiming to prevent the removal of 200 olive trees in Melendugno, in the southern Puglia region, for a tunnel for the TranAdriatic Pipeline (TAP) gas pipeline project. Police charged twice in order to move protestors away from gates to the work site and a number of people were injured.
Some of the protestors suffered bruising and others felt ill after the clashes, union sources said. The removal of the olive trees was suspended, but later resumed.
Tension remained high later in the day and demonstrators threw stones at police was trucks entered the site, hurting two officers.
The police baton-charged the protesters again to stop them getting into the site.
Mayors and councillors from 'No TAP' towns and villages took part in the protest, as did two regional councillors, Cosimo Borracino of the Italian Left (SI) and Antonio Trevisi of the anti-establishment 5-Star Movement (M5S), along with M5S MP Daniela Donno. The TranAdriatic Pipeline, which was recently approved by the environment ministry and by the Council of State, Italy's highest administrative court, aims to bring Caspian gas to Europe. Puglia Governor Michele Emiliano said the regional government had decided to appeal against yesterday's decision by the environment ministry to give the project the go-ahead.
He said he had called the first "technical talks" between the regional government and affected mayors to discuss a pending appeal to the Constitutional Court.
Emiliano said he deplored the clashes, saying "the government has proved incapable of listening to Puglia".
"Using the massive deployment of forces that was set up today, the government shows its incapacity to listen and politically process the requests of an entire region which has in its ruling programme, elaborated from the bottom and voted for by hundreds of thousands of Puglians, the transfer of the TAP link to another area".
Emiliano said earlier this month that uprooting olive trees to make way for the TAP was "illegal".
Voicing his support for farmers who clashed with police, Emiliano however added: "the regional government does not have instruments to stop a project that the government has told police to protect, an operation considered absolutely strategic". Before he became Italian premier, then Foreign Minister Paolo Gentiloni said last year that "The creation of the Trans Adriatic Pipeline is strategic for the diversification of provision sources" not just for "the EU and the Balkans" but also "for Italy".
Speaking in June at the foreign ministry in Rome during the fourth session of the inter-governmental commission on economic cooperation between Italy and Azerbaijan, Gentiloni said "after the inauguration of the project in Thessaloniki, about one month ago, a challenge has opened: seeing Azeri gas reach Italy by 2020" .
"Now we can look at new horizons", he said. The objective, recalled Gentiloni, is to boost economic and political relations between Rome and Baku, considered a "strategic regional partner".
The TAP consortium is made up of the following companies: BP (20%), SOCAR (20%), Snam (20%), Fluxys (19%), Enags (16%) and Axpo (5%). It is set to invest 5.6 billion euros in the gas pipeline in the next few years.