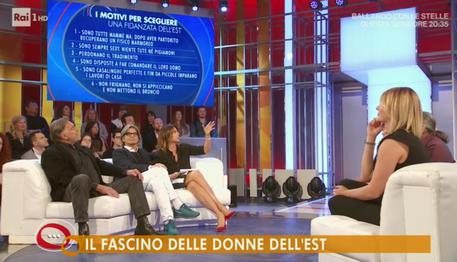 (fixes name from Paolo to Paola, end 2nd graf).
(ANSA) - Rome, March 20 - RAI chief Antonio Camp Dall'Orto on Monday announced the closure of a Saturday-afternoon talk show amid controversy over a report that the State broadcaster ran at the weekend on why some Italian men form relationships with women from Eastern Europe. "People make mistakes, and they're duty-bound to apologise, but apologies sometimes aren't enough," said Dall'Orto, announcing the closure of Parliamone Sabato (Let's talk About It Saturday), presented by veteran host Paola (RPT Paola) Perego. RAI President Monica Maggioni earlier apologized for the show, which House Speaker Laura Boldrini, among others, branded "unacceptable". "I didn't see the show. I'm finding out about it from websites," Maggioni told ANSA. "What I see is a surreal representation of Italy in 2017.
Then, if this representation is given by the public service broadcaster, it is a crazy mistake, unacceptable. I personally feel involved as a woman. I apologize.
"As a company we will try to understand how this service came about". The Parliamone Sabato show on flagship channel RAI1 featured a graphic showing what it argued were the six main advantages of romance with an Eastern European woman.
These included the ability to recover their figure after giving birth and, purportedly, a greater willingness to forgive affairs and let the man be the boss.
They also included a lesser inclination for "whingeing", always wearing sexy clothes instead of pajamas or shellsuits, and being "perfect housewives". RAI1 Director Andrea Fabiano also apologized via Twitter.