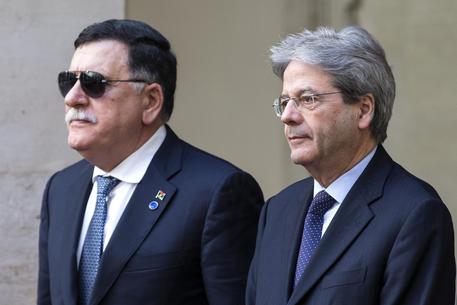 (ANSA) - Rome, March 20 - EU members must share the migrant burden, Premier Paolo Gentiloni said at an EU-Africa contact group meeting Monday. Migration from Africa to Europe "will not disappear by magic from one day to the next, and those who promise miracles risk confusing public opinion," he said, calling for "long-term work" and a common commitment. "The EU must take on the burden of the commitment, both in welcoming those who have rights and repatriating those who do no have rights; it's not just geography that decides who should commit on common ground," he said.
Gentiloni called for a collective effort to combat the asylum-seeker crisis, which is seeing record numbers crossing the Mediterranean to Italy. "Europe and North Africa contact-group meeting," Gentiloni said via Twitter, "only a common commitment can make it possible to regulate migrant flows in the Mediterranean".
Gentiloni told the EU-Africa contact group meeting on curbing central Mediterranean migrant flows that "Italy has greatly appreciated Europe's commitment to supporting Libya, an open path that must become a wider road". He said "in 60 years (since the Treaty of Rome), there have been many results, many expectations but also a few risks if we are not able to respond to some of the demands of our co-citizens.
"Among these the demand to regulate migrant flows in the central Mediterranean is one of the strongest demands".
Gentiloni told the contact group that "we must cooperate to stabilise Libya. "We have the political and diplomatic foundations in the accords we have reached and I think that we know just as well, and (Libyan Premier Fayez) al-Serraj is the first to know, how much this diplomatic agreement needs to be strengthened in terms of consensus for the accord in the country", Gentiloni told the group.
"Stabilisation is needed as well as combating further risks of division which have manifested themselves in the last few days" in Libya, where factions are fighting the internationally recognised national-unity government in Tripoli.
Fighting human traffickers on the central Mediterranean migrant route from Libya to Italy is a humanitarian fight, Gentiloni told the group.
"We must combat the idea that this initiative has negative aspects on the humanitarian level, it is the exact opposite," Gentiloni said.
"Cooperation between Libya and EU countries is needed to prevent and restrict the action of traffickers who are the negation of any humanitarian principle," he said.
Interior Minister Marco Minniti, for his part, told the group that Italy will deliver a first batch of motorboats to Libya to patrol its coasts by the end of April or within the first two weeks of May.
"The first of the 10 motorboats envisaged by the recent accord will be handed over," he said, adding that "90 sailors of the Libyan Coast Guard have trained aboard the (Italian flagship) San Giorgio and are now in the last stages of their training".
"When they are ready we will hand over the first boats," Minniti said.
Minnit also said that migrant camps to be set up in Libya will be set up alongside humanitarian organisations and will therefore "fully" respect all human rights. According to the most recent figures, migrant arrivals from Libya to Italy this year were 31.88% up over 2016 and 80.96% up on 2015, at a record of over 18,000.