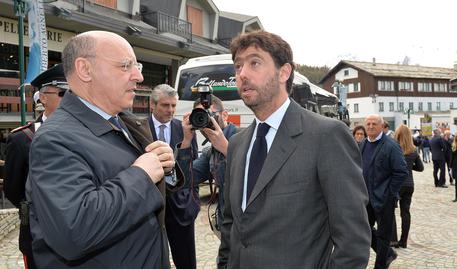 (ANSA) - Rome, March 7 - Juventus Chairman Andrea Agnelli had contacts with 'Ndrangheta Calabrian mafia boss Rocco Dominello "to handle tickets and season tickets," an Italian Soccer Federation (FIGC) prosecutor told the parliamentary anti-Mafia commission Tuesday. General Manager Beppe Marotta also had "occasional relations" with ultra milieux allegedly linked to 'Ndrangheta bosses, prosecutor Giuseppe Pecoraro said. Pecoraro said he had received over 5,000 pages of evidence from Turin prosecutor Armando Spataro in a probe into alleged 'Ndrangheta infiltration of Juve fan circles. Angelo Attaguile of the rightwing populist Northern League, co-chair of the 'mafia and sport' committee on the anti-mafia commission, said "we want to get to the bottom of this, unfortunately there are links between criminals and fans in soccer, managers have to avoid them for the transparency of the sport." Attaguile said the panel's action could not be influenced by "powers-that-be".
Juve has denied all knowledge of the alleged links.
Responding to the report, Agnelli denied meeting Calabrian 'Ndrangheta mafia bosses about tickets. "With respect for investigative and judicial bodies I stress that I never met mafia bosses," Agnelli tweeted. "What I have read is false".