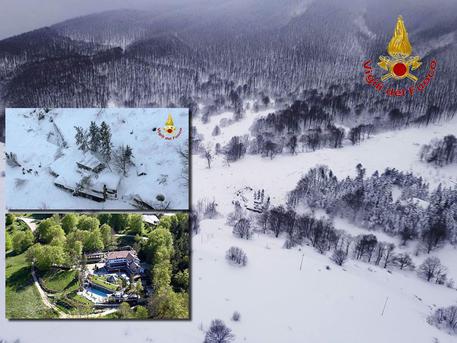 (ANSA) - Pescara, January 19 - Abruzzo Alpine rescuer Antonio Crocetta told ANSA on Thursday that "there are many dead" after an avalanche hit the Hotel Rigopiano, a mountain hotel in the region. The avalanche followed a series of strong earthquakes in central Italy on Wednesday. Rescuers on Thursday pulled out three victims from the snow and rubble and around 30 people are missing.

Two people have been rescued.

Firefighters who arrived at the Hotel Rigopiano said Thursday that "the situation is dramatic - the hotel has been swept away, only a little piece remained upright". Fire brigade communications officer Luca Cari added: "there are tonnes of snow, uprooted trees, debris that buried the area where the hotel was".

Dog units used in the search have found nothing so far.

"We are calling out but no one is answering," rescuers said. The scene was described as "a tragic mix between an earthquake and an avalanche".

A health operator who specialises in resuscitation is headed to the Hotel Rigopiano along with rescuers. "Children are involved in the collapse (of the structure)," the operator said.

The rescuers said that they were continuing to dig but added "it's extremely difficult". Crocetta and others had to use skis to get to the hotel because of the heavy snow that has hit Italy. Alpine rescue personnel reported that the avalanche probably took place because of Wednesday's earthquakes. Therefore, the hotel staff and guests have probably been under the snow and rubble for almost 24 hours. "The avalanche is huge" said rescuers. Rescue vehicles, including ambulances, have been blocked by snow about two metres high some nine kilometres from the Hotel Rigopiano, sources said Thursday. Firefighters are reaching the scene with a helicopter and a track vehicle that can carry up to eight people. The first people to reach the hotel were personnel from the Alpine Rescue who got there with skis.
The Hotel Rigopiano is located in Abruzzo's Gran Sasso National Park.
The mountainous region of central Italy has been struck by a series of quakes since August that destroyed historic centers in dozens of towns and hamlets. A deadly quake in August killed nearly 300, while no one died in the strong aftershocks in October largely because population centers had already been evacuated. In the meantime, the entire region has been hit by cold weather and buffeted by snowstorms, piling more suffering on to the hard-hit population. People left homeless by the earlier quakes had been moved to hotels in the region, but it wasn't immediately clear who was staying at Hotel Rigopiano, which is located in the Gran Sasso National Park.