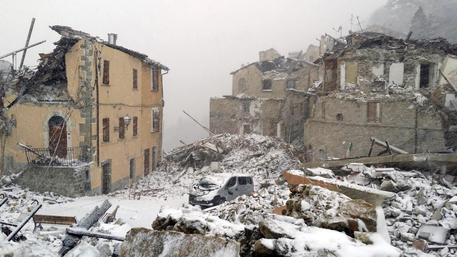 (ANSA) - Rome, January 18 - One person was killed near Teramo and another man missing and feared dead in an avalanche near L'Aquila and a woman and child were pulled from rubble near Teramo after four strong earthquakes rocked snowswept central Italy on Wednesday.

The body of an 83-year-old man was recovered from the ruins of a building that collapsed due to heavy snowfall and four earthquakes at Castel Castagna near Teramo.

The search for the 60-year-old man, buried under metres of snow at Campotosto, was called off Wednesday night after hopes of getting to him faded.

The series of four quakes above magnitude 5 that hit central Italy in the space of three hours has never been seen before, experts said.
The cluster "is a new phenomenon in recent history for the modalities with which it manifested itself," seismologist Alessandro Amato of the National Institute for Geophysics and Vulcanology (INGV) told ANSA.

A resident of the village of Pizzoli near Abruzzo capital L'Aquila on Wednesday gave a dramatic, weeping cellphone report of the situation after several quakes hit the snow-bound town.

"We're in the street, submerged in snow and we can't even flee. The cars can't move because of the snow. There are continuing quakes and people are screaming in the streets. I'm vainly trying to reach my mother who's in a building in Montereale".

Three livestock farmers have been reported missing.
The alarm for the farmers was sounded by friends who were unable to contact them via mobile phone. A great deal of snow has fallen in the area, near to Arquata del Tronto, and there are fears that structures may have collapsed with the quakes.
Another 12 farmers who had been reported missing have been tracked down. Central Italy suffered a series of devastating earthquakes last year, including one in August that claimed around 300 lives.
Misery in the areas affected by the quakes has been compounded by the recent wave of snow and freezing weather. The first quake took place at around 10:25 and rocked Lazio, including Rome, Abruzzo and Marche. Another strong earthquake took place at 11:14 and another still at 11:26 and then one came after shortly after 14:30.
The first and third earthquakes were magnitude 5.3 and the second was 5.4, according to initial estimates by the National Institute of Geophysics and Vulcanology (INGV). The epicentres of those quakes were in the province of L'Aquila, in Abruzzo.
The tremors were felt as far away as Ravenna in the north and Foggia in the south. Parts of some structures collapsed, including the bell tower of the Sant'Agostino church in Amatrice, the town worst-hit by the August quake. Some Rome metro stations were evacuated as a precautionary measure and services suspended, although trains have started running again on the A line. Several schools in many areas were evacuated too.

Rome Mayor Virginia Raggi said Wednesday that there is no cause for alarm in the capital. Firefighters are checking several buildings after dozens of reports of cracks appearing and the Rome metro was briefly shut because of the quakes.
"In agreement with the prefect's department, which has contacted the fire brigade's operative centre, (I can say) there is no reason for alarm in the city," Raggi said on her Facebook page.
Raggi said she had not decided to close Rome schools but added that checks would be run to make sure school buildings are fit for use.
Civil Protection Chief Fabrizio Curcio said that assessing the situation after the new series of earthquakes in central Italy was difficult due to snow in many areas. "The situation is quite complicated," Curcio told Sky television. "We are receiving reports from all over the nation. Obviously the quake was felt clearly all over the centre, as far as the capital. "At the end of the checks we'll be able to say whether we've had particularly difficult situations or not. It has been snowing without stop in that area for hours and it will continue to do so for the next few hours". The civil protection department in Marche on Wednesday announced an alarm for possible avalanches due to the heavy snowfall and the quakes.