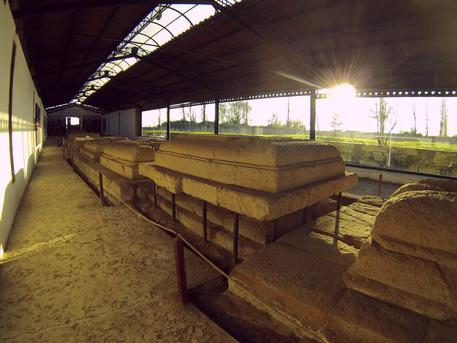 (ANSA) - Rome, January 5 - The archaeological area of ancient Lavinium is set to open for the first time to the public on January 7, thanks to an agreement between the City of Pomezia, the Superintendency for the Archeology of Art and Landscape of Metropolitan Rome, the provinces of Viterbo and Southern Etruria, and private donors.
The ancient city, located near the seaside village of Pratica di Mare just south of Rome, was mythically founded by exiles from Troy and was cited in the work of ancient Roman orator Symmachus, ancient Greek historian Timaeus, and ancient Greek poet Lycrophron.
Visitors will be able to tour both the Lavinium Archaeological Museum as well as the archaeological site unearthed in 1955 and 1956 by Roman topographer Ferdinando Castagnoli, then-director of the University of La Sapienza's Institute of Topography, and Roman archaeologist Lucos Cozza.
There the pair discovered an ancient burial mound 18 metres in diameter surrounded by more than 60 precious objects including vases, weapons, and items made of silver, bronze and iron, all dating to the 7th century B.C.
The ruins revealed that the area reached its peak expansion in the 6th century B.C. The burial mound, or "tumulus", has come to be known as the Heroon of Aeneas, after research attributed it to the mythological legend of Aeneas, the Trojan hero of Virgil's Aeneid.
Today the Heroon of Aeneas, the Sanctuary of Lavinium and its thirteen altars is located inside the protected nature area owned by the Roman noble Borghese family.
Superintendent Alfonsina Russo said visitors can see the 13 altars built out of tufa that were once red and were built between the 6th and the 4th century BC, as well as a ceremonial building and the remains of two kilns that produced votive objects.
"They form an archaic sanctuary that brings visitors back into the atmosphere and religious practices of a remote age shortly after the founding of Rome," she said.
"Recent excavations have revealed a fourteenth altar, which is now restored and included in the new visitor's route".