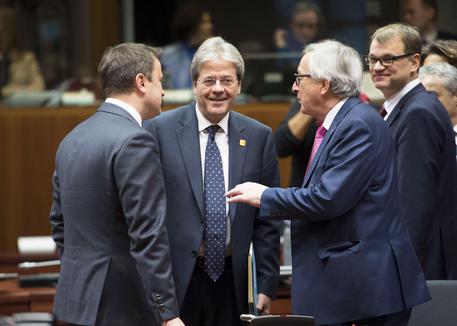 (ANSAmed) - BRUSSELS, DECEMBER 16 - Paolo Gentiloni has debuted in Brussels as prime minister. ''All colleagues asked me to say hi'' to ex-premier Matteo Renzi and ''welcomed me warmly'', said Gentiloni, adding that his counterparts were curious and impressed by the speed with which the crisis had been solved after Renzi's resignation.
But then the new premier attacked, denouncing the ''huge delay'' with which Europe is reacting to the migration crises.
The delays become more significant because ''problems are quicker than solutions'', he observed at the end of the summit.
The premier arrived six hours after he was supposed to hold a press conference, presenting his excuses to reporters with irony: ''The meeting only lasted 12 hours''. But if the tone was soft, his message was sharp, also towards Germany, which ''set the example'' on migration policies, he said, but shouldn't relax now because the Aegean route is ''apparently under control''.
The emergency is not over just because the problem has moved along the Mediterranean route and towards Italy, he said. And action on the 'migration compact' for Africa is too slow, as the plan was launched in January and is only now moving its first concrete steps.
He also spoke against not passing a good reform of the Dublin agreements. ''One and a half hour'' of the 12 were spent deftly working on the conclusions, where at the end Germany's haste was halted to close everything by next June.
The objective has been outlined but it is not an obligatory mandate anymore.
And Italy is on the frontline in foiling the Polish attempt to extend by a year instead of six months the sanctions against Russia for Ukraine. He also said it was wrong to threaten more over actions in Syria because Europe should not have ''automatic reactions'' especially at a time of ''political transition'' like the one started with Donald Trump taking office as US president. (ANSAmed).