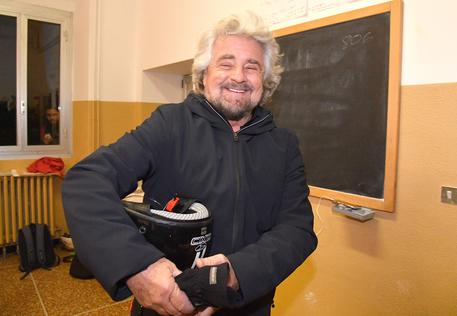 (ANSA) - Rome, December 5 - Beppe Grillo, the leader of the anti-establishment 5-Star Movement (M5S), called for immediate elections with the Italicum system after Premier Matteo Renzi announced he was resigning following Sunday's victory for the No camp in the Constitutional referendum. "Goodbye Renzi," Grillo wrote on his blog. "(Now) the Italian people must be called on to vote as soon as possible. The fastest, most realistic and concrete (option) to vote at once is to vote with the law that's there - the Italicum". The Italicum system is designed only to apply to the Lower House as, under the Constitutional reform rejected on Sunday, the Senate was meant to revamped and made up of regional representatives.

Northern League leader Matteo Salvini said Monday that he was ready for new elections as soon as possible "with any election law" after Premier Matteo Renzi announced he was quitting following defeat in Sunday's Constitutional referendum. "I don't think Italy can afford months of debate on a new election law," he added when asked about Renzi's call for the No front to propose a new election system.
Premier Silvio Berlusconi's opposition centre-right Forza Italia (FI) party said Monday that the whole of parliament had the job of formulating a proposal for a new election law to replace the Italicum. "I'd like to say to Renzi that the honour of reform the election law is not down to us, but to the whole parliament, the parties of the ruling majority and the of the opposition," FI Lower House whip Renato Brunetta said.

Ex-premier Massimo D'Alema, one of a group of rebel members of Renzi's centre-left Democratic Party (PD) who backed the victorious No camp in Sunday's referendum, said Monday that it would be "irresponsible" to hold immediate elections. "The head of State will give the mandate to a figure who will measure the willingness (to form) a government necessary for the country," he said. "It would be irresponsible to vote now as the Constitutional Court still has to rule on the Italicum (election law)".