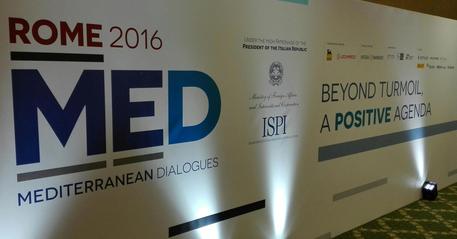 (ANSAmed) - ROME, DECEMBER 1 - The 'Med Dialogues' conference, which begins Thursday in Rome and runs through Saturday, December 3, will tackle some of the biggest crises in the Mediterranean - migration, Syria, the fight against ISIS - as well as some of the greatest opportunities for economic growth in the area.
A key moment for the conference will be a meeting between US Secretary of State John Kerry and Russian Foreign Minister Sergey Lavrov, especially given the increasingly critical situation in Syria in recent days.
The conference, organised by the Italian Foreign Ministry and the Institute for International Public Studies (ISPI), will host representatives from 55 countries including heads of state, ministers, and leaders in the worlds of finance, international relations and civil society.
Conference participants' discussions on the crises and the opportunities in the Mediterranean area will be held under the umbrella theme of "Beyond Turmoil, a Positive Agenda", which seeks to find constructive solutions in a time of confusion and disarray, focusing on the overarching topics of the international agenda.
Foreign Minister Paolo Gentiloni will represent the Italian government at the conference on Thursday, and Italian Premier Matteo Renzi will give an opening and closing talk on Saturday.
Gentiloni will also meet separately with both Kerry and Lavrov, who are expected to hold a face-to-face meeting during the conference.
Syria is in the spotlight, where Russia-US dialogue thus far hasn't produced an end to the conflict that has been ongoing for more than five years now.
Meanwhile, in less than two months the White House will have a new occupant in President-elect Donald Trump, who, at least on paper, appears more open to Russian President Vladimir Putin.
Italy is also counting on an improved US-Russia relationship, based on the principal of keeping open dialogue with Moscow while also maintaining a firm approach.
Italy has a solid economic partnership with Russia, and Russia has said that Lavrov's participation in the conference (where he is also scheduled to meet with Italian President Sergio Mattarella) will be an occasion to "discuss measures to overcome the negative trends in bilateral trade", weakened by European sanctions over the Ukraine crisis.
The Russians said this economic relaunch is favored by "Italian political, regional, business, and civil circles".
On Wednesday the "Med Dialogues" were preceded by a series of preparatory meetings, including round table discussions between businesspeople from the two shores of the Mediterranean, the meeting of the Aspen European Security Group, Med-Reg (Mediterranean Energy Regulators) meetings, and meetings of experts from the NATO Defense College.
The conference formally opens Thursday, based on four pillars: shared prosperity; shared security; migration; and media, culture and society.
ANSAmed is an event media partner together with RAI and La Stampa.(ANSAmed).