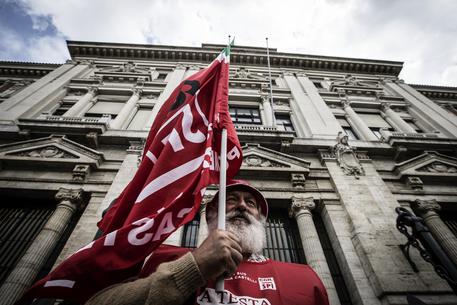 (ANSA) - Rome, November 4 - The Italian government's economic team, led by Tommaso Nannicini, released a 32-page document on Friday to explain how retirement will change based on provisions in the country's 2017 budget bill.
Here is a simplified overview of the measures: - VOLUNTARY EARLY RETIREMENT: Can be requested at 63 years of age and 20 years of contributions; is a loan until retirement age for which the cost is borne by the worker. The rate on net pension for each year of early retirement can reach up to 5.5% of the retirement once retirement age is reached. The loan must be paid back within 20 years. In the event of premature death, insurance covers the cost. There are no cuts for pension transfer to a spouse upon death, nor is any collateral required to secure the loan. On a net pension of 1,286 euros per month and a request of 85%, the rate for three years of early retirement should be 208 euros (there are tax breaks) for 13 months. - SOCIAL EARLY RETIREMENT: The needy can request a social early retirement at 63 years old and 30 years of contributions if unemployed or disabled (with a disability level of at least 74%) and 36 years of contributions if involved in particularly onerous activities (for at least six years). INPS social security agency sends a direct money transfer equal to the pension amount certified at the time of the request (but for 12 months) if less than 1,500 euros gross. The payment is taxed as dependent work and therefore the net amount is greater than an equivalent pension. According to an example in the tables contained in the government's document, with a gross pension of 1,000 euros (865 euros net), the net earnings bridge is 899 euros.
- COMPANY EARLY RETIREMENT: The requirements are the same as those of the voluntary early retirement (63 years of age and 20 years of contributions) as well as the base financial conditions, but the contribution is disbursed by the company in order to lower the rate on the future pension at the time of retirement age. With a gross monthly pension of 1,000 euros, an early retirement requested at 95% of the net pension and a three-year advance, the company contribution would total 43,505 euros. The contribution would increase to 70,283 euros in the case of a gross pension of 1,615 euros (net 1,286 euros).
- TEMPORARY INTEGRATIVE INCOME (RITA): As an early retirement part or all of the accumulated capital can be used to obtain a monthly income for up to 36 months prior to retirement age.
Taxation is between 9% and 15%. With an accumulated capital of 27,539 euros (98 euros a month to receive starting at retirement age) the worker can decide whether to use the money for a year of RITA advance (1,950 euros a month), for two years (975 per month), or three years (650 euros a month). - EARLY WORKERS: For those who deposited at least 12 months of contributions prior to 19 years of age, penalties are eliminated on retirement for those who retire before 62 years old.
Retirement can be requested with 41 years of contributions if unemployed, disabled, or if work performed was particularly onerous or strenuous, including nursing and obstetric shift work as well as nursery school teaching.
- NO-TAX AREA EXTENDED: The earnings range for non-taxable income is extended to 8,125 euros annually, including for retirees with less than 75 years of age.
- INCREASE AND EXTENSION OF 'FOURTEENTH-MONTH SALARY': For retirees with a total personal income less than two times the minimum (2,125,000 pensioners up to 1.5 times the minimum, 1,250,000 between 1.5 and 2 times the minimum). Those who have income up to 1.5 times the minimum (about 750 euros) who now receive variable amounts between 336 and 504 euros in a one-time payment, according to the contributions paid, will have a 30% increase (the 14th-month will be between 437 and 655 euro once a year). Those with incomes between 1.5 and 2 times the minimum (between 750 and 1,000 euros) will have a 14th-month payment for the first time, but with the prior amounts.