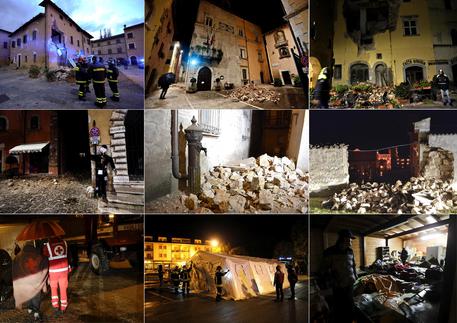 (ANSA) - Tolentino, October 27 - Thousands of people are unable to use their homes after two big earthquakes shook central Italy on Wednesday, two months after a devastating quake claimed almost 300 lives. "We have around 2,000 or 3,000 homeless people," Cesare Spuri, the head of the Civil Protection Department in the central Marche region, told ANSA on Thursday. A 73-year-old man died of a heart attack linked to the quakes and several people suffered minor injuries. But there are no reports so far of people being buried under rubble. The first 5.4-magnitude quake struck at 19:10 Italian time and was followed by an even bigger one, of magnitude 5.9, at 21:18. There have been at least 200 aftershocks, the National Institute of Geophysics (INGV) said Thursday.
"There were 105 registered after 2:00 in the morning (on Thursday) alone," INGV seismologist Alessandro Amato told ANSA.
"Overall, there were 30 aftershocks of magnitude 3.0 or higher".