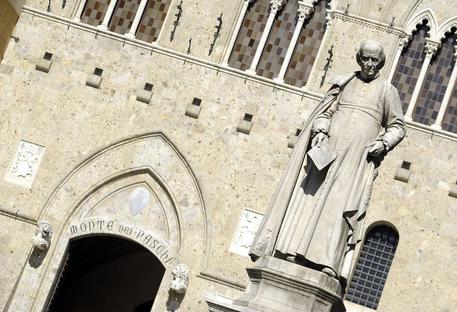 (ANSA) - Milan, October 21 - Troubled Tuscan lender Monte dei Paschi di Siena (MPS) has risen 56% on the Milan bourse over the last four days of trading of almost 36% of its capital, analysts said Friday. The surge started after the presentation of a plan by former industry minister and former Intesa Sanpaolo CEO Corrado Passera, and in anticipation of new MPS CEO Marco Morelli's business plan Monday. MPS, Italy's third-biggest bank and the world's oldest, ended the day's trading Friday up by 13.3% on the Milan bourse.
Record-high trading was seen even when compared with recent days' surges, with 12% of the capital and over 351 million shares traded during the day's session.
MPS shares rose for the fourth consecutive day after its board on Tuesday confirmed plans to go ahead with a turnaround plan while also leaving the door open to a privately funded rescue led by Passera. The Passera proposal was first rejected in July.
It would be an alternative to MPS's current, European Central Bank-approved rescue plan involving a five-billion-euro capital increase and the securitization of 10 billion euros' worth of non-performing loans (NPLs) with backing from Italy's private Atlante fund.