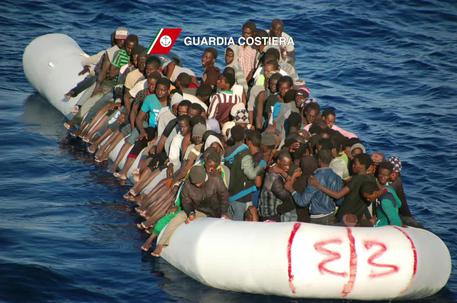 (ANSAmed) - Rome, October 5 - Twenty eight dead bodies were recovered in the Strait of Sicily on Tuesday and Wednesday during 33 rescue operations coordinated by the Italian Coast Guard in which 4,655 people were saved at sea, ANSA sources said.
Italy is in the front line in tackling the Mediterranean migrant crisis but its search-and-rescue efforts have not been able to prevent a long series of migrant-boat disasters in the southern Mediterranean. The rescued asylum seekers were aboard 27 dinghies, five small boats and one larger boat and they were all assisted in waters off the coast of Libya. The 28 dead bodies are in addition to 10 others recovered two days ago, when another 6,000 asylum seekers were saved. On Wednesday the Bourbon Argos rescue ship operated by medical NGO Médecins Sans Frontières (MSF - Doctors Without Borders) docked in Palermo with 1,020 asylum seekers saved in the Strait of Sicily. The migrants, mostly from Sub-Saharan Africa, included 161 women and 15 minors.