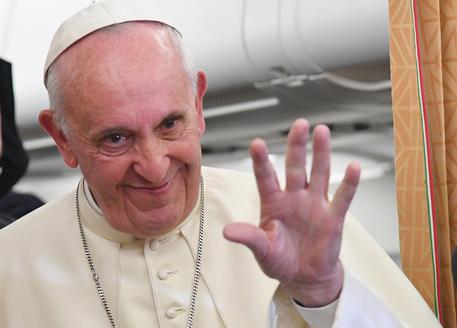 (ANSA) - Vatican City, October 3 - Jesus would never send someone away because of their homosexuality, Pope Francis said during his return from Azerbaijan on Sunday.
"In my life as a priest, as a bishop, also as Pope, I have accompanied people with homosexual tendencies, also practicing homosexuals. I accompanied them, I brought them close to the Lord: some can't, but I accompanied them and never abandoned them," Francis said.
"When someone who is in this condition comes before Jesus, Jesus will certainly not say 'go away because you're gay'," he continued. The pope, however, condemned the "wickedness" allegedly perpetrated by so-called "gender theory", which argues that people should be able to identify as male, female, neither or both.
"It's against the natural order," Francis told journalists during the flight back to Rome.
"It is one thing for people to have a homosexual tendency or even to change sex, but it is another thing to try to teach along this line in schools, to change the mentality. I call this cultural colonialism," he said.