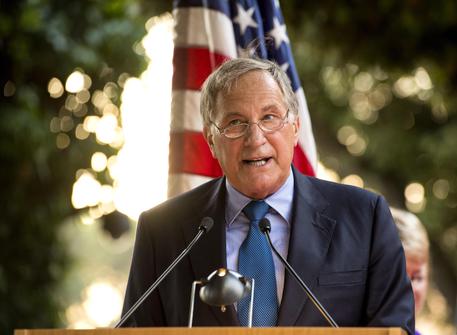 (ANSA) - Rome, September 13 - United States Ambassador to Rome John Phillips said Tuesday that "it would be a step back for foreign investment in Italy" if the No vote won in the autumn referendum on the government's overhaul of the country's political machinery. The reform amends the Constitution and, among other things, turns the Senate into a leaner assembly of local government representatives with limited powers to save money and make passing legislation easier.
Speaking at the Istituto di Studi Americani in Rome, Phillips said that, while "the referendum is an Italian decision", the country must also "guarantee political stability".
He continued: "63 governments in 63 years do not give guarantees. (The reform vote) offers hope of government stability to attract investors". Premier Matteo Renzi has said he will quit if he loses the referendum. Almost all of Italy's opposition groups are campaigning for a No vote. Phillips also said that United States President Barack Obama has great respect for Renzi. "Renzi has done an important job and is held in very high esteem by Obama, who appreciates his leadership," Phillips said.
On Monday it was announced that Obama will lay on a State dinner for Renzi at the White House on October 18.
A No in the referendum on a reform of Italy's political machinery would be seen "as a negative shock for the economy and the Italian credit rating," Fitch's head of sovereign ratings for Europe and the Middle East, Edward Parker, said Tuesday. "Any political turbulence or problems in the banking sector that may have repercussions on the real economy or on public debt could lead to a negative intervention on Italy's rating," he added. Italy is set to vote in late November or early December on the reform that would turn the Senate into a leaner, regionally based assembly with limited lawmaking powers, cutting gridlock and expenses. A No vote would have a knock-on effect on the government of Premier Matteo Renzi, who initially said he would quit if the reform was defeated but has recently hinted that would no longer be so. Italy's business leaders have come out strongly for a Yes vote.