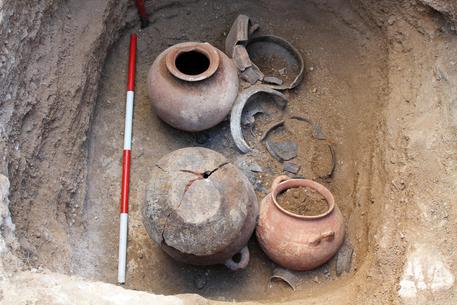 (ANSAmed) - ROME, SEPTEMBER 8 - Archaeologists working in the Etruscan necropolis of Vulci (near Viterbo) have discovered a tomb with the remains of a woman who was possibly a relative of a princess buried nearby.
The excavation was led by the Archaeological Superintendency for the Metropolitan Area of Rome, the Province of Viterbo and Southern Etruria; in cooperation with the Vulci Foundation and the contribution of the City of Montalto di Castro.
The tomb was found in the area known as Poggetto Mengarelli, where in recent months a nearby illegal excavation by looters led archeaologists to uncover the now-famous Tomb of the Golden Scarab, that of an Etruscan princess buried around 700 B.C., outfitted with jewelry made of bronze, silver, gold and amber.
The excavations of the new tomb were concentrated north of the Tomb of the Golden Scarab, uncovering 25 burial sites, some still intact, mainly from the Etruscan period of the 8th century B.C. and that of the Roman Republic.
Under the white limestone closure archaeologists found a funerary urn in tact with ashes of the woman buried in the tomb, together with a fuseruola (a disk with a hole in the middle) - a clear sign of activity linked to spinning cloth - as well as a set of 12 vases, one with a painted geometric decorative motif of the "red on white" type, and five bronze crescent-shaped fibulae (brooches or clasps), perhaps once attached to a garment that was placed over the urn.
"We're on the tracks of the first Etruscans who buried their dead in this area," said Carlo Casi, scientific director of the Vulci Foundation.
"We find ourselves before an exceptional discovery," said Superintendent Alfonsina Russo.
"These initial highly interesting discoveries will allow us to finally understand the topographic and structural development of the northern necropoli of the Vulci, and finally unravel the numerous doubts that accompany the funerary contexts of this period, which are often decontextualised and isolated," she said. (ANSAmed).