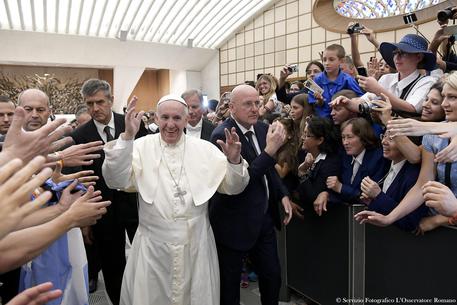 (supersedes previous)(ANSA) - Rome, August 12 - Pope Francis on Friday asked forgiveness from a group of rescued former prostitutes and sex trafficking victims on behalf of the men who abused them. "I ask your forgiveness for all those men who have made you suffer," Francis told 20 young women who have been rescued from forced prostitution during an unannounced visit earlier in the day. The women's average age is 30 and they come from Albania, Italy, Nigeria, Romania, and Ukraine. "I ask forgiveness on behalf of all the Catholics and men of faith who exploited, abused and raped you," the pope said during the visit in an apartment in Rome's Pietralata neighborhood that lasted about an hour, and during which he listened to their stories.
The pope went on to urge them to feel "joy and hope in the future that awaits you".
The women were rescued by members of the Pope John XXIII Community, a lay Catholic group that works among the poor and the marginalized. The visit was part of Francis' Fridays of Mercy. The pontiff wanted to demonstrate that "mercy is not an abstract word but concrete action...to restore dignity to people who have been subjected to new forms of slavery," the Jubilee of Mercy website said.