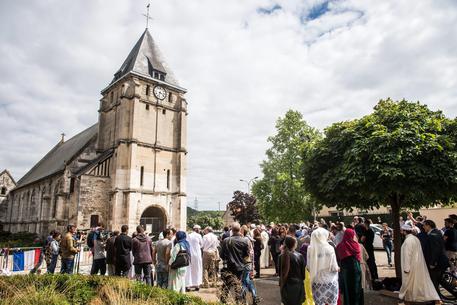 (ANSA) - Rome, July 29 - The archbishop of Chieti-Vasto told ANSA on Friday that a call on Muslims to join Christians in church this Sunday in condemnation of Islamist terrorism after extremists murdered a Catholic priest during Mass last Tuesday near Rouen in France is "a very beautiful sign, one we were waiting for". "It means believers of all religions, and especially Christians and Muslims, condemn violence in the name of God and consider it false and contrary to all religious inspiration," said Monsignor Bruno Forte.
Italy's Islamic Religious Community (COREIS) said earlier in the day it would send delegates to churches and parishes across Italy on Sunday, July 31, "to bear witness to spiritual brotherhood".
"We feel it is essential at this time with this greeting from the Muslims of Italy to give a concrete signal of profound respect for the sacredness of the rites, the ministers and the places of worship of the Christian faith," COREIS said in a statement. "This enormous gesture puts offside those who would divide, those who want a strategy of terror," CEI spokesperson, Father Ivan Maffeis, told ANSA.
Italy's Muslim community heeded the call of the French Institute for Advanced Islamic Studies (IHEI), which works closely with the French interior ministry and will also send delegates to French churches this Sunday.
COREIS delegates will be at Mass in churches and parishes in Agrigento, Brescia, Brindisi, Fermo, Genoa, Milan, Novara, Piacenza, Rome, Siena, Sondrio, Verona, Vicenza and Ventimiglia.
The so-called Islamic State (ISIS) extremist group has claimed responsibility for Tuesday's attack in which two knife-wielding French nationals entered a church in the town of Saint-Etienne-du-Rouvray near Rouen during Mass, took 84-year-old Father Jacques Hamel hostage along with four other people, and slit the priest's throat before being killed by security forces.