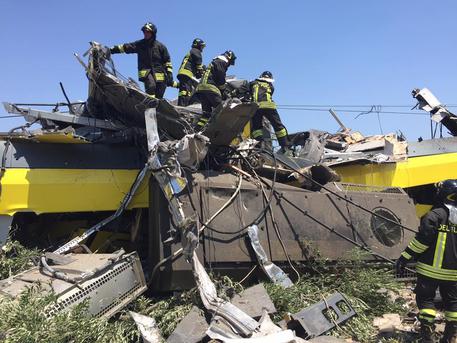 (ANSA) - Rome, July 12 - The death toll from a train crash in Puglia Tuesday has risen to 11, sources said. One of the trains had left Corato and was heading for Andria and the other was en route from Andria to Corato. They collided head-on. A child aged just a few years has been extracted from the wreck and was taken to hospital by helicopter.
Firefighters are working to extract more people from the twisted metal of the first cars on each train. There could be more fatalities, rescuers said.
At least 18 people were hospitalized. Of the injured, 15 were taken to hospital in the town of Andria, 10 of them in critical condition. Another three people were taken by helicopter to hospital in Barletta, local public health authorities said. Scheduled surgeries have been postponed and off-duty medical staff has been summoned back on the job to deal with the emergency.