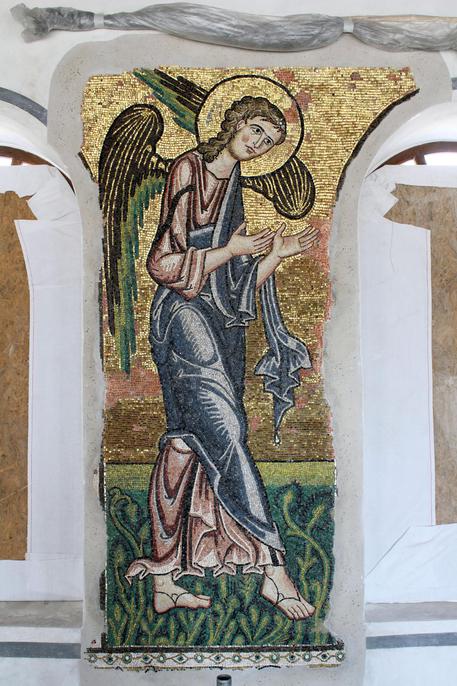 (ANSA) - Bethlehem, July 5 - Italian restoration workers have uncovered a seventh mosaic angel in the Church of the Nativity in Bethlehem which was previously hidden under plaster.
The angel, revealed by restorers Piacenti S.p.A, adds to a set of stunning mosaics at the site, which is traditionally considered the birthplace of Jesus.
"Of the 2,000 metres of original mosaics, it was possible to save 150 metres squared," said Giammarco Piacenti, owner of the company which has been employing Italian restoration excellence in one of the most important sites of Christianity. Inside, the basilica is still a work site, but a climb up the scaffolding reveals the mosaics in all their bright colours and beauty. Reflecting the light of the sun, visitors can admire turquoise, red, green and shimmering gold. Angels, saints, St. Thomas who points to Jesus' wound with his finger, Jesus on a donkey coming into Jerusalem, classical Christian scenes that have been given new life in the first phase of restoration which brought back the basilica's original splendour.
"It's the project of my life," said Piacenti, as he explained that more than 1.5 million mosaic pieces were used for the restoration, in stone, glass and mother of pearl.
The seventh angel was discovered using a thermography technique that scans solid surfaces in the search for works hidden underneath them.
Piacenti's attention is now focused on 50 columns in the central nave of the basilica, which are hiding paintings from the 12th century depicting saints from many Christian countries.
"Adopt a column" is the title motto of the campaign to support the restoration launched by Ziad Bandak, Palestinian Minister for Religious Affairs and head of the restoration committee for the basilica.
"Whoever wants to donate money and become part of this beautiful adventure is free to do so," he said.
The Church of the Nativity is a basilica located in Bethlehem, West Bank.
The church was originally commissioned in 327 by Constantine the Great and his mother Helena over the site that is still traditionally considered to be located over the cave that marks the birthplace of Jesus of Nazareth.
Experts said last month that fresh traces of Constantine's time have been found in the basilica.
The Church of the Nativity site's original basilica was completed in 339 and destroyed by fire during the Samaritan Revolts in the 6th century.
A new basilica was built in 565 by Justinian, the Byzantine Emperor, restoring the architectural tone of the original.
The site of the Church of the Nativity has had numerous additions since this second construction, including its prominent bell towers.
Due to its cultural and geographical history, the site holds a prominent religious significance to those of both the Christian and Muslim faiths.
The site of the Church of the Nativity is a World Heritage Site, and was the first to be listed under Palestine by the United Nations Educational, Scientific and Cultural Organization (UNESCO).
The site is also on UNESCO's List of World Heritage Sites in Danger.