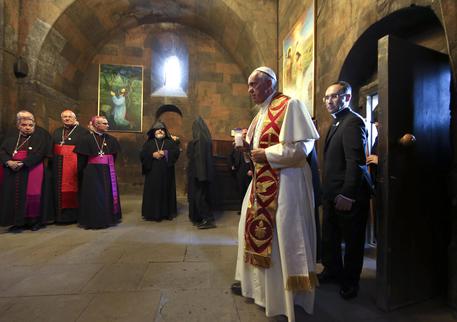 (ANSAmed) - Istanbul, June 27 - The Turkish government attacked Pope Francis on Monday after the pontiff reiterated during a visit to Armenia at the weekend that he considered the mass killing of Armenians by the Ottoman Empire during World War I to be a genocide. In a statement released by the Turkish foreign ministry, Ankara said it was "disappointed" by the pope's words and accused him of "discrimination based on religion" and of not having an "conciliatory approach". At the weekend Turkey's Deputy Prime Minister Nurettin Canikli accused the pope of having a "crusades mentality". Francis also sparked rage in Turkey when he referred to the mass killings as genocide last year.
Turkey will summon the Vatican ambassador to Ankara to express its "malaise" over Pope Francis' recognition of the 1915 Armenian genocide at the hands of the Ottoman Empire during an apostolic visit to Armenia that ended yesterday, Turkish daily Hurriyet cited "reliable Turkish diplomatic sources" as saying Monday. Turkey refuses to use the term, claiming the 1.5-million death toll is inflated and that many died on both sides as the Ottoman Empire crumbled during World War I.
Pope Francis mourned the genocide of Armenians by Ottoman-era Turks last Friday on the first of his three-day apostolic visit to the "first Christian country" on the 14th international trip of his pontificate.
Addressing Armenian President Serzh Sargsyan, religious leaders, diplomats and members of civil society, the pontiff said the 1915 slaughter of an estimated 1.5 million Armenians was "a tragedy, a genocide".
The deaths marked the beginning of a long list of "dreadful catastrophes... made possible by aberrant racist, ideological or religious motives, that clouded the minds of the tormentors to the point where they... annihilated entire peoples," the pontiff said.
Last year, the pope said the slaughter was "considered the first genocide of the 20th century" at a Mass marking its 100th anniversary at St Peter's Basilica.