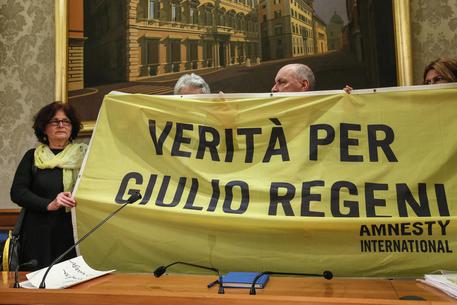 (clarifies university position).
(ANSA) - London, June 9 - A spokesman for Cambridge University on Thursday blamed the Italian media for allegedly misreporting the fact that four teachers did not answer Italian prosecutors' questions in a probe into the torture and murder of Cambridge researcher Giulio Regeni in Egypt.
"The stories that recently appeared in the Italian press are simply untrue, the university supports the Italian authorities in their investigations into this horrendous event," the spokesman said.
The Regeni family on Wednesday expressed "sorrow and disappointment" at the teachers' reported refusal to collaborate.
The spokesman said "we remain open and committed to working with the Italian authorities in order that the truth emerges for Giulio Regeni and his family." Regeni's parents said after the reported refusal to cooperate Wednesday that "we entrusted our son Giulio to the university community of Cambridge and we expected the utmost, concrete solidarity from this community, and therefore total collaboration in the search for the truth on his kidnapping and terrible murder in Cairo while he was doing research work for the university." Paola and Claudia Regeni urged "all, without omerta', to sincerely and actively work to get at the truth on Giulio's barbaric murder, and to collaborate to this end with Rome prosecutors, in whom we place our utmost confidence".
They said "those who believe in the rigour of research, the duty of solidarity, and the safeguard of human rights cannot shun the moral and civic duty to contribute to the investigations".
Judicial sources said Tuesday that Cambridge University teachers supervising Regeni declined to answer Italian prosecutors' questions on emails about his work on Egyptian trade unions.
Regeni's supervisor Maha Abdelrahman and others reportedly availed themselves of the option of not answering questions from Rome assistant prosecutor Sergio Colaiocco and security police, the sources said.
Prosecutors had been hoping the emails might shed light on Regeni's contacts and work with the trade union movement, which some think may have been linked to his murder.
Regeni, 28, went missing on the night of January 25, the heavily policed fifth anniversary of the uprising that toppled former strongman Hosni Mubarak, and his burned, mutilated, and partially unclothed body turned up in a ditch on the road to Alexandria on February 3.
Egypt has repeatedly denied its security forces were behind the torture and murder of Regeni, a Cambridge doctoral student researching Egyptian trade unions.
Egyptian authorities have offered up a series of unlikely explanations ranging from a car crash, to a gay lovers' quarrel gone wrong, to a kidnap for ransom that turned deadly.
Italy has rejected all those versions.
Human rights groups say Regeni is among hundreds of people who have disappeared in Egypt over the last year.