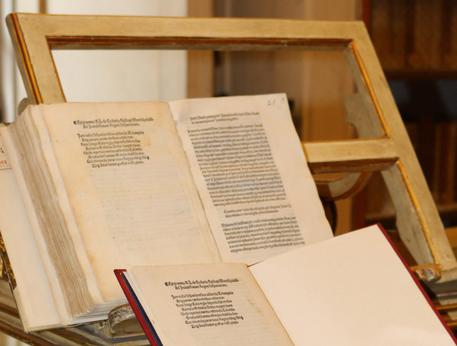 (ANSA) - Rome, May 18 - Italian Carabinieri art police said Wednesday that they have recovered the letter in which Christopher Columbus announced the discovery of the 'new world'.
The letter, which was stolen in Florence and then sold on in the United States, was produced in 1493 and is considered of enormous historical importance.
The Columbus letter, which was stolen from Florence's Riccardiana library, was found in the United States Library of Congress in Washington D.C. The Congress library had bought it for around $400,000, although experts believe the document's real value is closer to $1 million. The United States agreed to return the letter after the Carabinieri art police told them its origins. Italian Culture Minister and US Ambassador John R. Phillips agreed that the precious document's return to Italy "is a symbolic fact that marks the friendship and total collaboration between our two countries".
"It is interesting how 500 years after the letter was written it has made the same trip back and forth from America," Franceschini said at a repatriation ceremony with Phillips in Rome. Columbus wrote the original, which contained his first impressions of people and the landscape in the so-called New World, to his sponsors King Ferdinand and Queen Isabella of Spain upon returning to Europe in 1493. Between then and 1501 the letter was translated into Latin and 14 to 16 printed copies were made and distributed, officials said at the ceremony. In 2012, agents with the Department of Homeland Security Investigations (HSI) got information that one of those copies had been stolen from Biblioteca Riccardiana in Florence and replaced with a forgery. It is not known exactly when the copy of the letter was stolen, but officials told journalists that a Swiss collector sold the missing document to an American counterpart in 1990. It was later sold on again and finally donated to the Library of Congress in 2004. HSI notified Italian officials, prompting a joint American-Italian investigation that culminated with Wednesday's handover.