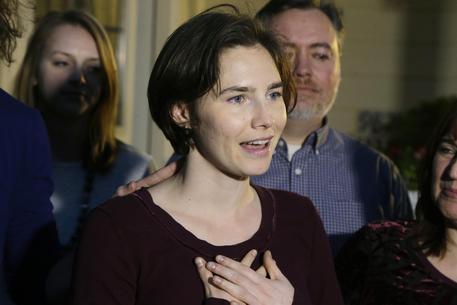 (ANSA) - Strasbourg, May 17 - The European Court of Human Rights on Tuesday accepted an appeal against Italy presented by Amanda Knox, the American woman acquitted by the Cassation Court of having a part in the murder of Meredith Kercher in Perugia. In the appeal, Knox says she was subjected to an unfair trial and was maltreated during questioning. The court judged Knox's dossier to be valid and told the Italian government of its decision so that it can defend itself.
In March 2015 the supreme Cassation Court of appeals acquitted Knox and Italian former boyfriend Raffaele Sollecito in Kercher's 2007 murder, saying that evidence didn't physically link the pair to the scene of the crime. It was the end of an eight-year judicial ordeal for Knox who was first found guilty, then acquitted and finally cleared after a retrial.
Knox's appeal to Strasbourg regards the run-up to her first trial.
In it, she claims she was not given access to a lawyer who spoke English and was rapped on the head during questioning on November 6, 2007, four days after Kercher's murder - allegedly constituting inhumane and degrading treatment.
Sollecito welcomed the Strasbourg court's preliminary admission of the appeal.
"It's time people started opening their eyes on this affair," he told ANSA.
"Amanda was questioned for 15 hours without a lawyer and with an unofficial interpreter. There were abuses never highlighted in the media and it's just as well that there are judges that are now giving the right importance to what happened".