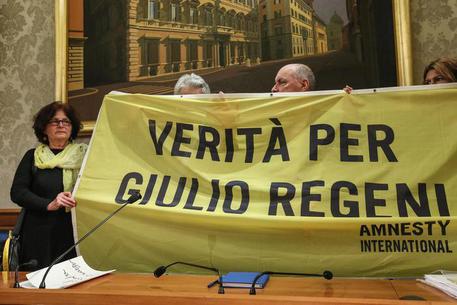 (ANSA) - Rome, April 29 - Foreign Minister Paolo Gentiloni on Friday urged Egypt to collaborate "seriously" on the Cairo torture and murder of student Giulio Regeni so that relations can return to normal after Italy recalled its ambassador after a probe stalled. "For us, a return to normality of relations depends on serious collaboration" on the Regeni case, Gentiloni said on RAI radio.
At the same time, while Italy remained dissatisfied with the level of Egyptian cooperation, Gentiloni revealed that contact with Cairo prosecutors has been restored.
"The Rome prosecutor's office has sent a new request (for information) and I know that contacts between the prosecutors' office are ongoing," he said on RAI radio.
Gentiloni voiced the hope that Rome Chief Prosecutor Giuseppe Pignatone's "activity can revive some useful contacts".
But in the meantime, he stressed, Italy was "maintaining a position of dissatisfaction".
Italy broke off judicial collaboration and recalled its ambassador on April 8 after a summit in Rome failed.
Rome has repeatedly called for records of phone calls made in the areas where Regeni disappeared and where his body was found 10 days later.
Regeni, a 28-year-old Cambridge doctoral student researching Egyptian trade unions, disappeared on January 25, the heavily policed fifth anniversary of the uprising that toppled former strongman Hosni Mubarak. His beaten, burned, slashed, and mutilated body turned up in a ditch on the city's outskirts on February 3. Egypt has repeatedly dismissed speculation that its security forces may have been involved in Regeni's death. Italy has complained of a lack of cooperation from Cairo in getting to the bottom of the case and recently recalled its ambassador to Egypt for consultations after the investigation into Regeni's death stalled, with Egypt proffering versions of his death that stirred disbelief, included a car crash, a gay lovers' quarrel, and a kidnapping for ransom gone wrong.
On Wednesday prosecutors in Cairo extended the detention of Ahmed Abdallah, a consultant for the Regeni family, by 15 days.
The prosecutors had ordered an initial four-day detention two days ago in a probe into alleged incitement to demonstrate illegally against a border deal ceding two islands to Saudi Arabia.
The family of Regeni, who are seeking the truth about his brutal murder, have voiced concern over Abdallah's detention.
On Tuesday they said that they were "anxious" over the arrest of Abdallah, president of the board of the Egyptian Commission for Rights and Freedom (ECRF), an NGO that is providing consultancy work for the Regeni's lawyers.
Amnesty International confirmed Abdallah was arrested along with activist Sanaa Seif and lawyer Malek Adly.
Egyptian special forces took Abdallah from his home on the night of April 24 and he stands accused of instigation to violence in order to overthrow the government, adhering to a terrorist group, and promotion of terrorism, Amnesty said.
In light of Amnesty's communique, the Regeni family expressed "concern over the recent wave of arrests in Egypt (of) human rights activists, lawyers and journalists, some of them directly engaged in the search for the truth about the abduction, torture and murder of Giulio", their statement said.
On Monday, which was a national holiday in Italy, Lower House Speaker Laura Boldrini reiterated the call for truth and justice for Regeni.
"We will never tire of calling for the truth. A democracy does not compromise," she said during celebrations to mark Italy's liberation from the Nazi occupation in World War II.