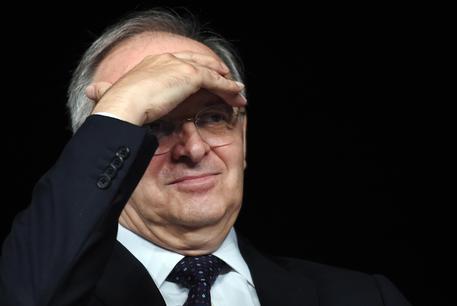 (ANSA) - Rome, April 22 - Piercamillo Davigo, president of Italy's National Magistrates Assocation (ANM) union, stirred an uproar on Friday over comments he made in an interview with Italian daily Corriere della Sera in which he said that politicians steal.
Davigo said that politicians "haven't stopped stealing; they've stopped being ashamed of it. They're boldly claiming what they used to do in secret. They say things like 'With our money we do what we want'. But it's not their money, it's taxpayer's money," Davigo said.
Former ANM president Luca Palamara said that now "isn't the time to feed a useless conflict between politics and the judiciary" and said he "didn't like generalisations" about corruption.
Antonio Leone, a member of the Superior Council of the Magistrature, the judiciary's self-governing body, called Davigo's comments "a misguided attempt to feed a new and violent clash between institutions".
MP Andrea Romano of the Democratic Party (PD) said Davigo seemed uninformed on current legislation. "I find it very coarse the idea that politicians all steal in the same way: it seems like Davigo isn't well-informed about the laws that we've made," Romano said.
"Laws that haven't made politicians honest from the first to the last, but that serve to fight dishonesty," he said.
However, the leader of rightwing Northern League, Matteo Salvini, said he would be open to meeting with Davigo.
"I know him and respect him, I'd meet him and I'd meet him gladly because some battles in common I'm interested in doing them with him and ANM," Salvini said.
"However I'd like it if there were more detailed remarks, because saying that politicians steal is too generic," he said.
Davigo was undaunted Friday, saying "the leadership class of this country when it commits crimes reaps a number of victims incomparably higher than any street criminal and causes more serious damage". Davigo said that "in Italy the common saying is that everyone steals. No, that makes me angry, many people steal. Not all. Otherwise it would make no sense to have trials". Davigo added that "saying that magistrates must only speak through their sentences is equivalent to saying they must keep quiet." He asked "have you ever read sentences? It's like when there's a fisherman who's caught an enormous pike in a local daily. I say: is the fisherman affected by protagonism or is the pike enormous?" He also said those who accused magistrates of abusing preventive custody were "without shame".