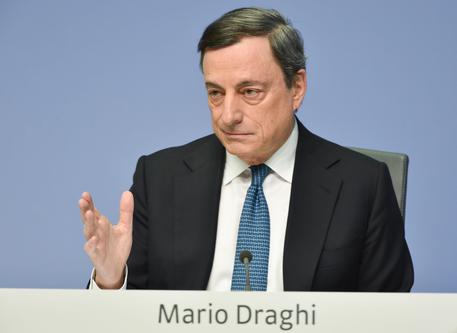 (see related) (ANSA) - Rome, April 21 - European Central Bank President Mario Draghi on Thursday described Italy's new Atlante fund to help the nation's weaker banks cope with non-performing loans and capital shortfalls as a "small step in the right direction".
He also said, however, that "we have not completely examined the details yet". Quaestio Capital Management SGR said Thursday that it has received authorization from stock-market regulator Consob to sell shares in Atlante. In a statement, private fund manager Quaestio said that it was close to "crossing the minimum threshold of collecting Euro 4,000 million set in the fund regulation".
The first major test for Atlante is the capital increase that Banca Popolare di Vicenza has launched to fill a capital shortfall signalled by the ECB. Atlante is sub-underwriting the operation up to a maximum of 1.5 billion euros.
Consob said Thursday that it has approved the publication of a prospectus by Banca Popolare di Vicenza and will allow the struggling bank to trade its shares in a 1.76 billion euros initial offer. A statement said that the initial public offering would run from April 21 to April 28.

The European Central Bank's governing council "continues to expect that rates will remain at current levels, or lower, for a long period and in any case well beyond the horizon" of quantitative easing," Draghi said Thursday. The ECB's rates are at an all-time low.