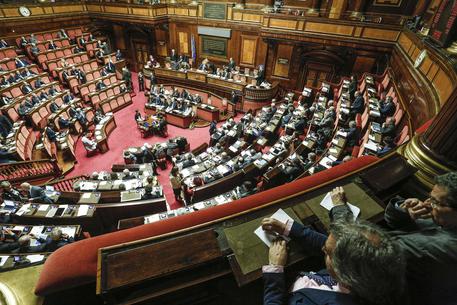 (ANSA) - Roma, April 20 - The ruling majority backing Premier Matteo Renzi's executive on Wednesday presented a request for a referendum to ratify the government's recently approved law changing the Constitution to overhaul Italy's political machinery. Renzi has staked his political future on the October referendum on reforms to make government cheaper and easier. Among other things, it transforms the Senate into a leaner assembly of local-government representatives with fewer powers. The referendum request was presented by Mauro Del Barba, the Senate treasurer for Renzi's centre-left Democratic Party (PD), said Roberto Calderoli, one of the deputy speakers of the Upper House. The ruling coalition's Senate whips, the PD's Luigi Zanda, Renato Schifani for the centrist AP and Karl Zeller of the AUT group, have been tasked with delivering the signatures needed for a referendum to the supreme Court of Cassation.
Renzi's government survived two no-confidence motions late on Tuesday over an oil probe, the latest in a long series of such petitions presented by oppositions groups to fail.
A motion filed by the anti-establishment 5-Star Movement (M5S) was rejected by the Senate with 183 votes against and 96 in favour.
Another presented by centre-right opposition parties went down with 180 votes against and 93 in favour. The motions were filed in the wake of a probe into alleged misconduct at oil and gas giant ENI plants in the southern Basilicata region that includes people with connections to the premier's administration. The oilman boyfriend of former industry minister Federica Guidi - who resigned earlier this month - is one of the suspects in the investigation, which has led to both Guidi and Reform Minister Maria Elena Boschi being questioned by prosecutors. Guidi's boyfriend Gianluca Gemelli is being investigated for corruption conspiracy and falsely claiming influence over a public official in order to obtain bribes. While neither Guidi nor Boschi are under investigation, wiretaps emerged last month in which Guidi discussed with Gemelli an amendment to a budget bill containing measures for the development of the Tempa Rossa oil field in Italy's south, which Boschi signed.
Renzi has always said the amendment was his, and on Tuesday, he denied it was passed without proper debate.
Denis Verdini's small Liberal Popular Alliance - Autonomies (ALA) group, which has recently given essential backing to the government for key reforms, helped the executive fend off the no-confidence motions.
Verdini is a former top aide of ex-premier Silvio Berlusconi who recently split with the Forza Italia leader and has several judicial headaches.
His frequent support of the government has caused controversy, with a rebel minority within Renzi's centre-left Democratic Party (PD) among the critics.