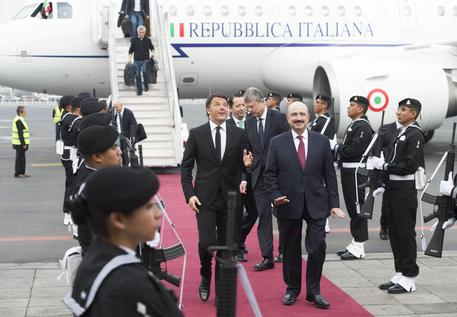 (ANSA) - Mexico City, April 20 - Premier Matteo Renzi said Wednesday a dissenting minority within his Democratic Party (PD) engages in a kind of reflex opposition. "It's no longer a novelty at this point," he told reporters in Mexico City. "There's a part of the PD that is in the opposition on everything... the referendum decision was taken by all of us together, if someone changed their mind I'm sorry but they don't count". Most PD minority faction leaders earlier declined to sign a petition for a referendum on the government's Constitutional reform law, saying that according to parliamentary etiquette it should be up to the opposition alone to file such petitions. Renzi has staked his political future on winning the referendum, saying he will resign if he loses it. The constitutional reform revamps Italy's political machinery to make it cheaper and easier to operate. Among other things, it transforms the Senate into a leaner assembly of local government representatives with fewer powers. Among the PD minority figures to reject signing the petition was former PD leader Pier Luigi Bersani.
The Italian premier is in Mexico City, the first part of a three-day North America visit that will see him at the UN in New York Thursday and Friday. Renzi will meet Mexican President Enrique Pena Nieto and then at around 17:00 local time will speak at the ITAM tech university. The premier was accompanied to Mexico City by the heads of several major Italian companies including ENI CEO Claudio Descalzi, ENEL CEO Francesco Starace, Finmeccanica CEO Mauro Moretti, SACE CEO Alessandro Castellano and Paolo Del Pino, Pirelli's Latin America chief.